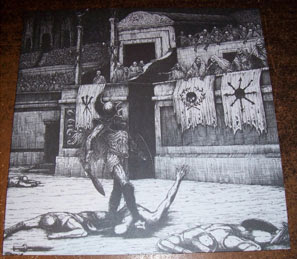 Any follower of Nocturnal Blood would know that it is a one-man project made up of Ghastly Apparition Ghastly Apparition (Nocturnal Ghoul, Spirit of Darkness) (formerly known as Blasphemer Nuclearwhore of Black Blood in the killer Blasphemy worship band Nuclear Desecration) which features members of California death metal band Sanguis Imperem during live rituals. So it seems pretty obvious why these two bands have chosen to release a split EP together. For the convenience of myself and the reader I will be reviewing this in two parts (one part for each side).

Old-school, intolerant and militant are the first three words that come to mind upon hearing this band. It is clear that these gentlemen are devoted to ancient death metal in the early 90’s spirit and that they honestly could not give a flying rats arse about “modern” death metal, so obviously Sanguis Imperem is right up my alley!

Influences that spring to mind right off the bat would have to be bands such as Bolt Thrower, Grave and Hellhammer. The instrumental sound on this is pure OSDM.

This side opens up with a strange fuzzed out clean intro entitled “Festum Mortis” that I’ve not got much to say about. It’s not out of place or anything, it fits in fine, but I’m just not 100% sure if it’s necessary.

Track 2 “Carrier of Plagues” gets right down to business with some old-school mid-paced riffing and marching drums building up to a faster section that lasts for the rest of the song. This song is very much in the style of early Bolt Thrower; primal and basic riffing with an extremely hostile, nihilistic and aggressive feeling.

“Tyrants of Iron” is next. It’s more pummeling than the previous song, with some steady rhythms and killer drumming (the drummer in this band is great, probably one of the best I’ve heard on recent releases). It’s a pretty varied song with some notable interesting vocal moments (three different members of the band contribute vocals on most songs).

The last song on this side, “Red is the Color of the Gods” stands out the most here. Again, it brings to mind early Bolt Thrower and it certainly wouldn’t have sounded out of place on “Warmaster”. It’s a reasonably melodic riff-fest that just slays, and the slower sections remind me of Incantation/Funerus, which is a big plus! Not much else to say really, but any OSDM fan would dig this track.

4.5/5 Any fan of old-school mid-paced DM should enjoy this! The only drawback on this side is the intro. A stellar follow up to their previous EP “The Stagnation of Centuries”. 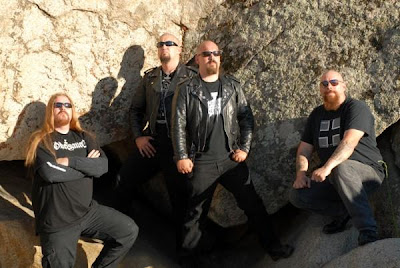 Nocturnal Bloods’ side of the split features more of what we have come to expect from this brilliant Blasphemy and Hellhammer worshipping project; an evil and creepy atmosphere that I like to call the “Hellhammer vibe”, interesting songs that the artist has clearly spent a lot of time perfecting, in a nutshell, it’s old-school, filthy and disgusting DEATH FUKKING METAL of the highest order.

This side begins with bells chiming in the moody intro “Chime the Bells of Doom” which sets a dark, sinister mood before leading into “Blasphemy Written In Fornication”, a song that could be used to perfectly show off what Nocturnal Blood is all about; murky production, ancient death metal worship, varied and interesting song structures, and crushingly dark moods.

The other songs on this release are more of the same, yet all very different in their own way. It is hard to describe a release such as this, as you are usually focusing on the deranged state of mind the sounds evoke deep within your soul, rather than the musicianship within the songs themselves. This type of music is not about showing off your mad skillz, it’s about projecting a certain atmosphere, and Nocturnal Blood does this extremely well.

“Abnormalities Prevail” and “Apocalyptic Rites” are the stand outs here, but every track is stellar. If you’re looking for something that hails the old ways and ignores the false, then look no further than Nocturnal Blood. 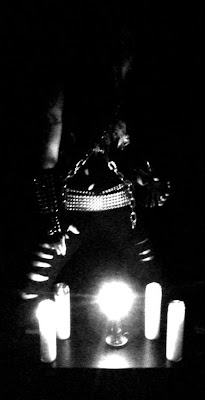 In summary; this is by far one of the best split releases I have had the pleasure of hearing. If you’re curious about either band, I would highly recommend giving this split a chance.

Sanguis Imperem are one of the greatest Death Metal bands in existence. Can't wait for the full length.