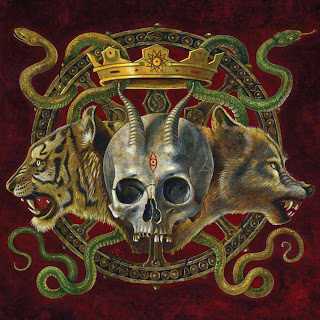 Canada's Weapon have been around for a while now, having formed back in 2003 and now up to their fifth release and third full length, "Embers and Revelations", which was released in October on Relapse Records.

Despite the jump to a much bigger label, Vetis Monarch and co. have stuck to their guns and continue to play thrash tinged, occult black/death metal in their signature  style, however, they HAVE cleaned up the production a lot on this album, which unfortunately sacrifices some of the evil atmosphere that made their first two albums great.

Thrashy riffs, dark melodies, load-blowing solos, top-notch musicianship and eerie atmospherics are the main ingredients you can expect in a typical Weapon song and, thankfully, they haven't changed the formula, leaving us with some killer songs that stand up well enough against anything the band has previously released. Highlights include  "The First Witnesses of Lucifer",  "Vanguard of the Morning Star",  "Liber Lilith" and "Shahenshah".

Vagabond's Band of the Week: Ghoulgotha

Ghoulgotha is a relatively new band hailing from San Diego, California in 2012. They play absolutely crushing old-school death/doom metal. They've only released one two-track demo so far. but that was more than enough to impress me. Hopefully it will be enough to impress you, too!

The band has given me permission to share a mediafire rip of the demo, which you can find here.

Posted by Vagabond at 6:32 PM No comments: