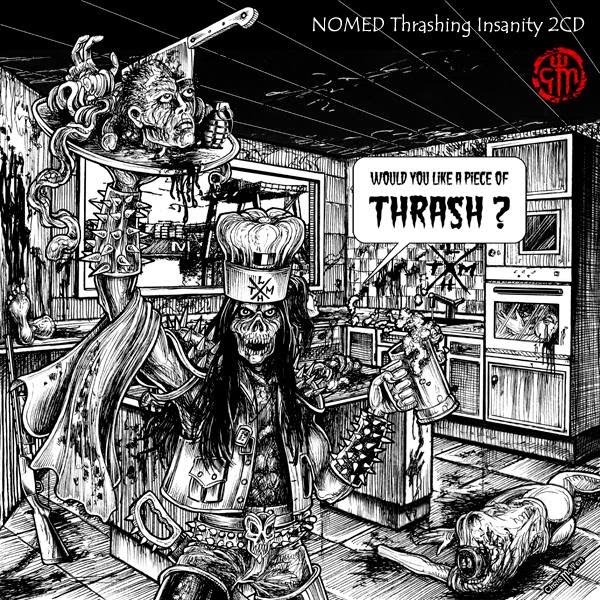 
NOMED is a CULT band from France that has undergone several name evolutions; first as SWORD (1984-1985); then changed to OXYDE (1985-1986); and then finally settled with NOMED (1986-1989, 1992-2008). "THRASHING INSANITY" is a double CD comprising the band’s entire 80's catalogue. Describing their sound is not of the easiest tasks, seeing as their style evolved from punk-influenced Thrash, to a much more obscure Death/Thrash sound on later recordings. Certain snippets from their material even sounds close to what bands like SARCOFAGO and PARABELLUM were doing at the time, like on the demos "THE DEN OF DEATH" and "INFERNAL SODOMIA". On later recordings they seem to reveal a vast progression in terms of musicianship, with much better and more technical arrangements and an elevation in craftsmanship, as on the "TROOPS OF DEATH" MPL, which was unmistakeably influenced by SEPULTURA at the time. Their 1989 album entitled "LIKE..." is most probably their best work ever, and saw a major improvement in terms of musicianship, with the band opting for a more technical approach, yet still managing to sound bestial and brutal as ever. Their riffs, song arrangements, and everything, is honed to a perfect tee here. All together, the compilation in question is compiled of 30 tracks and has a brutality scale that Thrashes to the 2h35m mark. It would only be righteous to pay homage to the label, ARMEE DE LA MORT RECORDS, for doing such a fine job with this release, seeing that it features KILLER artwork, done by the notorious CHRIS MOYEN. Add to that a 32-page booklet containing information and loads of photo's. "THRASHING INSANITY" is in part considered a tribute to their former guitarist, André Lemesle (R.I.P), who unfortunately passed away in 2008. Uncompromising and filled with attitude, NOMED will be remembered as one of the best Thrash Metal bands to have ever emerged from France. Be prepared to be battered in the skull by the hellish Thrash assault that is N O M E D, and may their legacy stand the test of time!!! 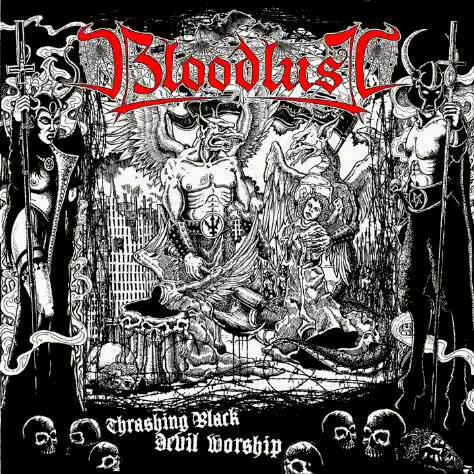 BLOODLUST is a two-piece hailing from Perth featuring seasoned veterans, Spectre (Aka James Cambell) and Disaster (Aka Louis Rando). The demo in question is the band’s first output and features five hellish compositions of furious Black Thrashing-FUCK YOU Metal with one goal in mind: TO MELT YOUR FUCKING FACE!!! The music retains that old school “feel” yet sounds incredibly fresh in a purely inventive aesthetic. I think its relevant to say the idea behind the project is strictly geared towards having a blast, although the output is impressionable enough to be taken seriously. At least I believe that. Also, take into consideration the fact that the individuals behind this abomination have been playing in METAL bands for years. Everything about “Thrashing Black Devil Worship” screams DENIM AND LEATHER. The music is instrumentally-proficient in all areas; pulsating, clear bass licks, throbbing screams from the abyssic pits; rhythmic, old-school inspired riffs; energetic and skillful drumming – all results in a brutal poser slaughter. Take note: this is metal that worships at the altar of bands such as CELTIC FROST, BATHORY, CORONER, SLAYER – and many more of the same pedigree. Now bang your fucking heads or die in fire!!!

Posted by Vagabond at 4:52 PM No comments: