1.      Please tell me something about your band, ENSNARED— its beginnings, and what you’ve released so far.

Ensnared started in 2009 if I remember it correctly. Previously the three of us (JK, HK and DÖ) had played in a band called Gravehammer that we’d played in since we were 12-15 years old. But soon enough the three of us realized that the others weren’t on the same level as us, both musically and spiritually speaking, so we destroyed Gravehammer in order to create Ensnared. DÖ left the band after our first and only gig as Ensnared, the line-up now is:
JK – drums
HK – guitars/vocals
AJ – guitars
AE – bass

We released a demo in 2011 and recently released our MLP called RAVENOUS DAMNATIONS DAWN.

2. Both your demo and EP was released through Nuclear Winter records; how did your collaboration with the label come about and how would you describe the evolution between the two releases.

I don’t remember how we got in contact actually, someone else in the band probably contacted the label or vice versa, but the collaboration bore fruit and continues to do so. NWR has always treated us really great and it’s a fucking great label to be on.

I think we’ve become more boundary-less since the first demo. With the line-up we have now, everybody is creative and has good ideas regarding the music, the arrangements and the lyrics etc, everybody feels that they have something to bring to the table and we drag the best out of each other. In the past I think we tended to rush things a little too much, in the studio and so on, we didn’t stop and think and discuss the things we were doing in the same way we’re doing now.

3. Today, western culture completely rejects death, and there’s no denying the fact that death can give one a pretty clear perspective of the things that matter most in life – do you agree? What matters most to you?

Yes, I agree that people rejects and neglects death, and even worse: they worship life. It truly makes me physically nauseous when I see people who think that this pathetic world and all living creatures in it is the most beautiful and great thing one can achieve and embrace, and that the world and humanity is worth fighting for. I perpetually spit on their moral values (and on moral values on the whole).
4. ENSNARED rose from the ashes of GRAVEHAMMER; would you care to tell us something about that and what led to the decision to change your moniker and sound?

Well as I mentioned above we were 3 members who felt that we were on another level compared to the other, and we knew we had the potential, so we chose to break free and destroy Gravehammer to create Ensnared. The sound existed all the time within the three of us but was held back by some members’ incompetence. Its hard for me to explain the sound and moniker in a more detailed fashion, we pretty much never sat down and talked about how we wanted to sound like and we never spoke of other bands in terms of how we wanted to sound, we said pretty much that we wanted to play death metal and started playing together and inspired each other. We’ve always searched for inspiration inwards rather than outwards, which has been proven to be pretty rewarding.

5. How do you evoke the kind of atmosphere you need to compose and record? Do you have to be in a certain state of mind?

I can only speak for myself in this matter, but I always have a burning and aching sensation inside that can only emanate through the torrents of Ensnared. I mean, it’s not an outlet because I don’t feel happy or calm after rehearsal or recordings, it just leaves me hungrier and madder inside. I feel that when the four of us who are the instruments of Ensnared get together it creates an atmosphere in itself and the music and feelings pretty much takes over when we play together. The atmosphere and state of mind is always with us, its not artificial.

6. What are your thoughts on the current state of metal in Sweden? Do you have any allies within your Country's scene or bands you feel you share a special kinship with?

Sweden is probably one of the best metal countries, but I still think most bands are worthless and I would probably feel the same way no matter what country I lived in. But yes, bands like Degial and In Solitude are close friends of mine and I also play in Invidious with several members of the bands I just mentioned. Other good bands are Irkallian Oracle, Trial, Kill, Gravmaskin and probably some more bands I cant think of right now. 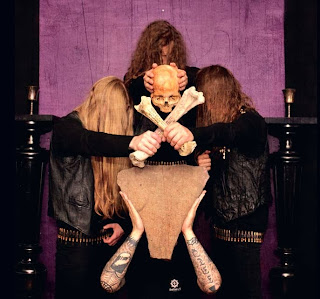 7. ENSNARED definitely does not sound like typical Swe-Death; instead, more something akin along the lines of Necrovore, Profanatica; how important is it for you to stand out or to have a sound of your own?


All that matters is that we’re pleased among ourselves within the band, I mean we’re not distracted by outside influences, but yes, I agree with you that we don’t sound like any other band in Sweden right now. I wouldn’t say that we’re “original”, but we’ve interpreted things through our own eyes and black hearts, and what has come out is Ensnared.

8. What kind of lyrical themes do you address in your songs and where do you draw inspiration from?

It varies a lot but to make it simple we deal with topics regarding the left hand path, death-worship and other occult topics.

9. Do you agree that competition in metal is a healthy thing as it can only breed more good bands that stand out in terms of creativity?

Sure. Personally I never gaze upon current bands that I like and think “I must be better than them”, as long as all the members are satisfied that is what matters. Although, in the beginning I used to look at bands that I hated and wanted Ensnared to be a knife against their throat, I wanted to show them what real death metal is about. Hate is one never-ending source of inspiration indeed…

10. How has the response been so far to your newest EP "Ravenous Damnation's Dawn" and what can you tell me about the artwork?

Its been great, I just wish that we had a stable line-up so we could promote the album with live-shows, but our time will come.
I can tell you that its created by a Chilean freak called Daniel “Desecrator” Corcuera, and it is painted in human blood.

I can’t think of any  favorite  quote but I can give you a quote that I really like by a philosopher/misanthrope/nihilist called Emile Cioran:
"Since all life is futility, then the decision to exist must be the most irrational of all"

12. What's on your playlists lately?

It varies, but lots of Antaeus, Jan Johansson and Grant Green.

13. If you knew you had only one day to live, how would you spend it?


I would kill as many of my enemies as possible.

14. That would be all. Thanks for taking the time to answer these questions. The last words are yours.

Posted by Vagabond at 9:19 PM No comments: