THE FUROR - Sermon of Slaughter 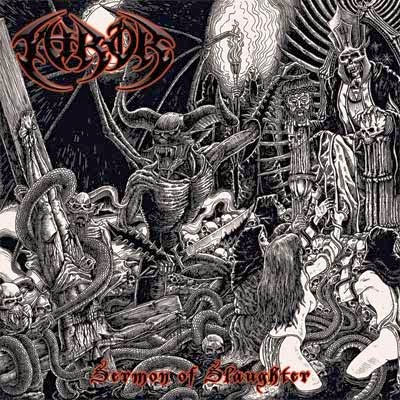 Hailing from Perth, Western Australia – THE FUROR made its initiation into the underground back in 2002, with various releases already tucked under the band’s belt – including three full lengths and two EP’s. I say ‘it’ because the band consists of but one individual named Disaster, who solely recorded all instruments by himself. It’s pretty fucking amazing considering the fact that THE FUROR is quite technically proficient in all areas. The release in question is their second EP and features four tracks of murderous black war metal of the highest pedigree.

The execution is fast, solid and well-arranged, with a good production job to enhance the whole listening experience. The sound displayed here is best compared to the likes of IMPIETY, COBALT and ABSU – and many other such acts of the same derivation.

The band seem to have a very refined approach concerning the song-writing as every song appears to be very finely crafted and arranged; rapid and hammering drumming; intense and fierce vocals; razor-sharp riffs and so on. I think this would make a welcome addition to any ABSU fan’s collection.

Summary: In my humble opinion, this is way above average and I’m surprised the band isn’t more well-known among maniacs. All the tracks are brilliant with the total length of the EP clocking at twenty one minutes. Expect nothing but fire and total bloodshed!
Posted by Vagabond at 7:27 PM No comments: