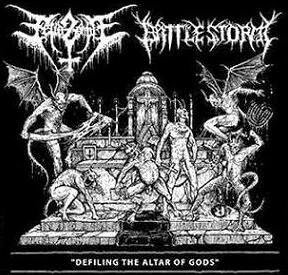 The release reviewed here is a split collaboration between the putrid mess that is FETID ZOMBIE, and Singaporean hellraisers, BATTLESTORM.

This split kicks off with FETID ZOMBIE, a one-man project displaying illustrious artist Mark Riddick behind all armaments of fire, as well as drum-programming. Exhibited here are three tracks conveying a sound that seems to characterize a very straight forward, and rather catchy old-school Death Metal. Nevertheless, a few odd arrangements tinged with Black and Thrash infused in their own bloody vomit definitely distinguish their tone. They certainly have a cool distinct vibe going, and owe more than a few nods to the likes of AUTOPSY, MASSACRA and MASSACRE. Summary: a good aural enticement for consuming fecal turds.

It is to my understanding that the split in question has a limitation of 500 copies, so be quick or miss out on a killer split.

Posted by Vagabond at 2:41 AM No comments: