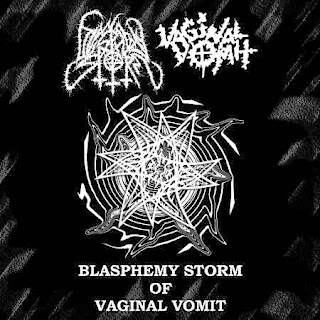 "Blasphemy Storm of Vaginal Vomit" is the anomalously titled split menace between BLASPHEMY STORM and VAGINAL VOMIT (as you should have gathered from the title). Both acts seem to produce quite the noisy rumpus, bordering on styles such as Grind and noisy black/death. Indeed, the compositions are pretty short, poorly recorded, sounding raw as hell and much like the gagging's of some kidnapped victim.

I'm not sure if any of you cunts out there are at all familiar with Maylasia's VULGA, which will have to be my closest comparison that I can adequately say will draw close to the sound of BLASPHEMY STORM, although, supplementary primitive. The band/project (since involving the input of one individual) in question provides us with four noisy and untitled tracks of hell-invoking Black/Death noise that's rather liable at provoking a migraine, yet still manages to sound somewhat enjoyable at the same time...

Next up we have the insipidly named VAGINAL VOMIT, who vomits out four tracks of primitive-as-fuck Grind Metal. The music itself possesses an obscure tone which simply adds to it's chaotic nature. VAGINAL VOMIT share a slight resemblance to their partners in heinous aural crimes against tree huggers, although they do seem to have more to offer in terms of musicianship, since we are actually able to hear a few solos (although here, not proper in any sense of the word) which are presented throughout the four tracks.

Anyway, this split album was an interesting listen for me, but there's no guarantee that I'll be listening to it again anytime soon, unless forced at gun point.