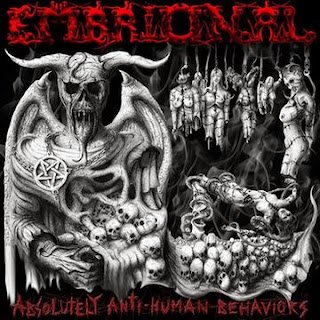 EMBRIONAL: a Polish Death Metal act founded in 2003, and with numerous releases tucked behind their belt already, finally assault our ears with a damn proper, full length recording, a perilously warped attack of brutal; skull mashing; mayhemic Death Metal which promotes utter darkness exquisitely. If you seek a valid description, then imagine the style on ULCERATE's "of Fracture and Failure" (on a lesser technical scale) intermingled with influences from both IMMOLATION and MORBID ANGEL. There is certainly no doubt that EMBRIONAL gathers their teachings from the old masters, yet they surprisingly manage to stand out by adding influences of their own.

I've been following the band for a while now, and with absolute certainty, I can say that this is by far their strongest material to date. The production on this album is pretty clear and audible without sounding dreadfully over-polished. I believe this to be a positive trait, as the band in question display a very proficient level of technicality, and this is an extreme necessity for a good production. In terms of instrumentals, EMBRIONAL is right on target, with amazing musicianship shining through from all angles. The music here is technical as I've said before, indeed, yet they manage to steer clear from sounding like an incoherent wankfest. They do too manage to invoke a rather dark and intensified atmosphere.

All together, eleven hair raising tracks are featured here, with each composition attaining a refreshingly diverse beginning, and not one sounds anything like the other. One of my personal favourite tracks from the album "The Last Step Into Nothingness", begins with an immediate harsh riff, before the grinding drums blast forth, making this one of the most intense tracks on the album. It's difficult to distinguish which song is distinctly heavier, or more intense, because the entire album is just one heavily fucking chaotic whirlwind from beginning to end, which will definitely be leaving you with a few bruises. All in all, a fine debut album, and one of the more overlooked releases from last year. Check it out if you enjoy the works of bands such as AZARATH, ULCERATE, or even ANIMA DAMNATA.
Posted by Vagabond at 9:42 PM