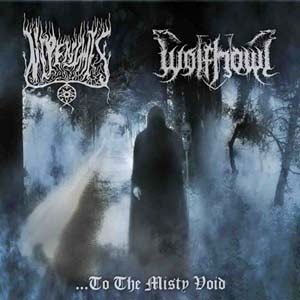 From the dark lands of Greece, comes a split alliance in the form of “…to The Misty Void” which features two rather promising acts, both specialising in blasphemous Black Metal art.

First band to make an appearance is NIPENTHIS, and consisting of their part – they present us with four honourable compositions, with a sound somewhat akin to Finish Black Metal bands a la HORNA, GOATMOON, SATANIC WARMASTER, etc. The music in question is fairly straight-forward, engaged with intelligible tremolo riffs, and a cold, dark atmosphere that paints images of isolated landscapes covered in a cloudy ambience. NIPENTHIS comes recommended to fans of bands like GRAVELAND, old GORGOROTH, and also, the Finish hordes I mentioned earlier in the review.

The aural assault brought forth by WOLFHOWL isn’t musically very different compared to NIPENTHIS; although, they seem to emanate a slight more “crispy” tone supported by a structure of well-executed percussion. It should also be noted that WOLFHOWL consist out of but one individual – who is responsible for all the hell-racket presented here. There’s a lot of catchy riffing prevalent, interlaced with a raw, deep-gullet rasp that only aids to the atmosphere. On behalf of WOLFHOWL – their part consists of four enthusiastic compositions, and comes recommended to fans of ABIGOR, SARGEIST, and the like – or basically, to anyone into the bands mentioned in the first paragraph.

My Summary: “…To The Misty Void” is a good effort, with both bands exhibiting great potential – but if there’s one factor concerning the music (includes both acts) that I will criticize on – then that will be the lack of character/or better said “originality” pertaining to the music. Sure, the devotion and passion is here… but there’s no denying the fact that identity only aids to your advantage, especially concerning the discussed style of music, otherwise you’ll find yourself lost in a sea of mediocrity. Other than that – I have nothing to complain about…I reckon there’s enough enthusiastic devils’ out there that’ll take a liking to this split.