BLACK CROW KING: To Pay the Debt of Nature 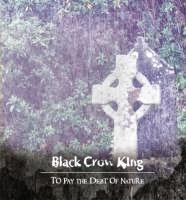 BLACK CROW KING is an atrocity spawned from the warped recesses of the mind of Corvus - a man involved in numerous other interesting projects such as PROJECT: VOID and FURY 161.“To Pay the Debt of Nature”is the debut full length from BLACK CROW KING, and a ghastly ride into the event horizon. The music in question can best be described as having a heavily warped take on extreme Doom.

The atmosphere has a very surrealistic and dismal feel to it— which is better understood when listened to for yourself.  There is certainly a vast amount of experimenting going on here; anything from Drone, Black Metal, and Doom to Power Electronics and Death Industrial. The sound here definitely has it's prominence in Doom, but with its own uniqueness.

All the songs flow at a sluggish pace, yet it does little to tarnish the overall listening experience. Like I stated, the foundation of the sound is Doom, and is much unlikely going to appeal to everyone. Some may call this "avant-garde"; though I would better describe it as "slow sadistic aural torture". So in a sense, listening to BLACK CROW KING could be seen as an act of masochism. Haha. Seriously, the music in question is cold, dark, and gloomy, with its main focus point: to make you feel like you’ve just entered a nightmare where any ounce of hope is impractical. This is the type of aural hate you embrace when you feel nothing but total scorn for the breed of filth that is humanity. My summary: “To Pay the Debt of Nature” is an album that takes you on an agonising, obscure journey, ultimately dragging you deep into the pits of despair… Giving it a few play throughs is suggested. Recommended greatly to fans of bands/or projects such as GNAW THEIR TONGUES, KHANATE, ASCEND, SUNN, BORIS, EAGLE TWIN, WOLVEHAMMER, WOLD, etc. – and even bands like PORTAL in terms of pure turbulent, warped structure.

Review by James Goatfukk
Posted by Vagabond at 11:55 PM