Interview with Vorfeed from Promethean Burn. 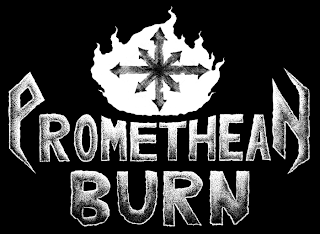 1. Hail Vorfeed! It is truly appreciated that you took the time to participate in this interview. Firstly, would you divulge to our readers a few integral bits of background information on yourself, as well as how you came to be involved in the underground metal scene.

I've been into metal for nearly twenty-five years now. Bands like Ozzy, Metallica, and Megadeth started the journey, and I first got into death metal in the early 90s through bands that were on Headbangers Ball: Sepultura, Morbid Angel, Entombed, etc. I lived in Vegas as a kid, so I had the first Goatlord CD back then as well... Chicken Dance was a mindblower! Bolt Thrower were another big early influence on me, and are still my all-time favorite metal band. I found a used copy of In Battle There Is No Law on CD in a record store a year or two before For Victory came out, and was fascinated by the insane cover art (and more so by the music!) I even ran a very (very!) early Bolt Thrower fan-site in my college years, around 1996/97; shortly thereafter I discovered black metal through online reviews, using LARM as the primary gateway -- later on I wrote some twenty or thirty reviews for them, myself -- and dove into the underground from there. I happened to get Countess - Ad Maiorem Sathanae Gloriam as one of the first handful of underground CDs I ordered, and that was a HUGE influence on the kind of black metal I got into. To this day, all of the Barbarian Wrath & Witches Brew bands are very special to me, and I'm honored to have run Basar North America (the North American distro for these labels) since 2006.

2. Tell me more about the label that you run, Promethean Burn, when and how did this venture spawn to life?

I started Promethean Burn in 2011. The name is inspired by Prometheus Unbound (and by association, Milton's Satan), and by phoenix-fire and Nietzsche's Three Metamorphoses ("You must be ready to burn yourself in your own flame; how could you rise anew if you have not first become ashes!") The idea was to put out some new and different things for bands which are a bit off the beaten path; my first release was an "Outshine" shirt for Assaulter (Aus), done through the absolute geniuses at Holy Mountain Printing. Since then I've done zip-up hoodies for my friends in Ares Kingdom, shirts for Faustcoven, Helcaraxë, and Megiddo, and my personal favorite (at least, every time I pour a dram!), a sand-etched Faustcoven whisky glass featuring custom lineart by Seth Bennett. I've also done reprints of the Morbid Tales and Heretic's Torch zines.

3. Not too long ago you released a killer compilation album comprising of New Jersey's Death Metal act HELCARAXË - this was your first release if I'm not mistaken? What can you tell us about it and your feelings towards it?

Yes, the first music release on Promethean Burn is the Helcaraxë - Children of Ygg CD. I've been into Helcaraxë since their very first album -- their brand of dark, heavy, yet triumphant death metal really stood out from the pack, even then -- and I was honored to be approached to release Children of Ygg. As far as I'm concerned, some of the band's best songs are on this collection: Sonnenrad, Othala, and The Return are especially killer, packed with stirring vocals and shredding leads. There are eight unreleased songs on the record, so it sounds more like another full-length than your usual comp CD. I was amazed by the strong, unified sound the band achieved, despite the fact that the CD spans their entire output. Their Black Flames demo is on there, and it sounds just like everything else! You can hear the whole thing (minus the bonus track, a cover of Bad Religion's "God Song") at our bandcamp: http://prometheanburn.bandcamp.com/ 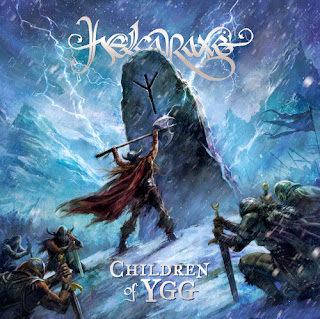 4. What kind of response did you receive from this particular release? Did you happen to send out many promotions?

The response was quite positive. Half the run is gone already, and I'm still trading & selling it vigorously. I do still have some die-hard packs with double-sided shirt & patch left in stock, in sizes S-2XL, so grab one before they're gone... and yes, digital and physical promos are available (see our contact & store at our website below), so get in touch if you'd like a copy for review!

5. Would you elaborate a bit on what kind of music taste you possess- what makes you tick and what does not- and also to shed some light on your all-time favourite bands and albums.

I have pretty wide-ranging taste. Mid-paced, stomping death metal is a favorite of mine, but I also like fast and chaotic thrash, hateful and twisted black metal, and riff-heavy doom, plus plenty of classic heavy metal. Riffs matter a great deal to me; I tend to like bands which write memorable songs, even if they're chaotic, over bands which are more about atmosphere. Intelligent lyrics are also a plus, since I prefer bands with meaning. Desert-island discs for me include Judas Priest - Sad Wings of Destiny, Mercyful Fate - S/T EP, Bathory - Blood Fire Death, Morbid Angel - Altars of Madness, Bolt Thrower - Realm of Chaos & For Victory, Slough Feg - Traveller, Destroyer 666 - Unchain the Wolves, Order from Chaos - An Ending in Fire, Countess - The Book of the Heretic, and Axis of Advance - Strike.

6. I understand you also have a passion for writing and spend a great deal of your time writing reviews. Can you tell us something about that? Have you ever considered on doing a fanzine? What are some of your favourite printed publications?

Truth be told, I have less time for reviews now that I'm running the label. I have over 250 reviews posted at vorfeed.net, so I figure it's long past time to write only about albums I'll be listening to ten years from now... but time will tell! I have considered doing a zine, but it's more work than I'm willing to take on right now. I feel as if reviews and zines are becoming less important in the age of the internet; now that every album can be heard, there's less of a need to describe the music, so I'm looking for zines with more to offer. My recent favorites include Morbid Tales (RIP), Heretic's Torch, The Sinister Flame, Chips & Beer, Convivial Hermit, Kaleidoscope, and Axiom of the Elite.

7. What do you think about all these pedantic wannabe "scholars" of English who believe, that because they possess grammatical skills, they can actually hand in a valid assessment on an album? I find this somehow annoying, in the sense that most of these dickbrains deliver negative reviews to good albums.

I prefer straightforward language over thesaurus/word-salad reviews. I've always felt that the purpose of a review should be to describe the album, so that the reader can decide whether or not they want to hear it -- a good review should give someone an idea of whether they will like the album, even if I didn't. Another pet peeve of mine is reviews which are mainly about other bands and/or "the scene" rather than the album under review...


8. What are your thoughts on format elitist fucks who express sentiments like: "only vinyl is real"?

I love the look and sound of vinyl, but between the cost of overseas shipping and the proliferation of three/four/five different collector's editions of the same record, I'm beginning to doubt that it's back to stay over the long-term. Which is great, in a way, because those of us who still care about underground metal after the Next Big Thing comes around will be able to snag all the LPs we missed on Ebay for a song, just as we could in the 2000s. I expect digital distribution plus touring and merch to take primacy over the next ten years.

9. Back to the concern of the label, could you provide us with your insights to any of your upcoming plans or aspirations that may be of interest to our readers?

First of all, the new Megiddo - The Final War shirt will be in stock and shipping the week of Oct. 14! With new live shows and a new album on the horizon, this top-quality shirt marks fourteen years since this Canadian black metal act's classic demo collection. These are double-sided shirts in sizes S-XL, limited to 60, featuring the demo's iconic woodcut by Albrecht Dürer ("St. Michael Fighting the Dragon") with lyrics on the back. 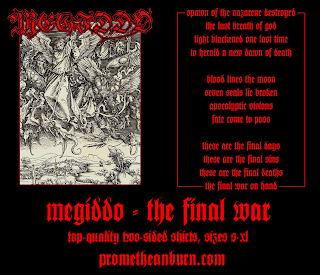 I also have two more scheduled releases on Promethean Burn. The first is Legacies Unchain - Satan Is Strong and Always Near CD -- this is their unreleased full-length from 2004. Insane epic/ritual death/black metal summoned by Dirtmaster and Kutcheck Gorealis from Hail (Fin). "Dragon City" must be heard to be believed... this has no release date at present, it'll be out when the art is finished. I'm also planning to re-release a new version of the Hunters Ground - No God But the Wild CD, remastered by Andrew Dunnam with brand new jewelcase art/layout. This is raw, bleak, and primitive black metal inspired by (and recorded in) the Appalachian wilderness. Both bands can be sampled below: Legacies Unchain: http://www.youtube.com/watch?v=9PC0d8xBDzA Hunters Ground: http://www.cvltnation.com/cvlt-nation-streaming-hunters-ground-no-god-but-the-wild/

10. What releases have you been buzzing on lately? Anything recommendable on your behalf?

11. That's all from me. I wish you all the best with your ventures. Any last sentiments before we lay this interview to rest?