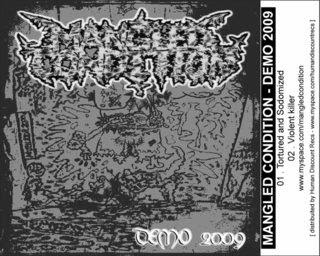 This demo released in 2009 contains 2 songs showcasing the sickness and technicality of Mangled Condition. The first is a 41 second intro track called "Violent Killer" which starts off with a great sample to get you ready for the brutality that will ensue. The audio sample paints a picture of a "world where violence, fear and murder are a way of life". Just as the track is coming to an end, with only 5 seconds left, the band grind their way through the speakers with some ultra brutal riffs and blasting drums, and vocals so guttural they would make Will Rahmer himself jelous!

'Tortured and Sodomized" starts off with another choice audio sample before slamming into one of the finest cuts of extreme metal I have heard in a long time. The riffs are razor sharp and showcase the technical abilty of band members 'Ekky'( Guitars, Drum Programming), and Ardi (Bass, Vocals). The riffs twist and turn along with Ardi's insane brutal vocals before the song takes a break from the blasting and slows down into a crushing venemous riff at about the 2 minute mark.. This doesn't last long however, Soon after we are treated to a bridge with some very tasteful lead work that adds an element of evil and depth to the song, And then its back to the blasting for the last 20 seconds of the track!

I can't recommend this enough, The best part is you can listen to both tracks for free at http://www.myspace.com/mangledcondition , The band have also just released these songs on a Split CD with French grindcore band "Decomposed Asthetic", The split is called "Innards Exposition" and can be purchased from Human Discount Records http://www.myspace.com/humandiscountrecs.

I may have taken an age to discuss just 2 songs, But this band is not your average death grind band. Which has me excited, I can't wait to hear more music from Mangled Condition, And if this demo is anything to go by, We're all in for a real treat when they put out a full length release.