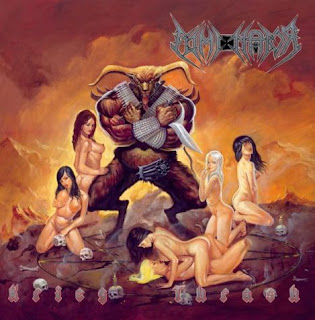 In all brutal honesty, there hasn't been a whole lot of newer Thrash Metal bands that have impressed me a great deal with the exception of a few good ones here and there. For me, REAL Thrash is supposed to be straight-forward and absolutely merciless in its delivery. Now, if you can associate with my thoughts and you absolutely fucking loathe the shitty retro crap of bands like Bonded by Blood and other homosexual-inspired shit of the same ilk, then look no further; I present you with the German-based riff machine—ELIMINATOR—a band that have opted for a more 80’s influenced sound with a pure dose of much needed aggression. No, seriously...these guys are the real deal as far as the new wave of Thrash is concerned. Fuck, I don’t even know if I’m comfortable associating ELIMINATOR with the new wave. ELIMINATOR might as well be from the 80’s, but maybe they are what the modern scene needs? Bands like ELIMINATOR to keep the old school flame alive and burning which I believe, will be burning for a very long time. Expose your ears to the brutal sounds of ELIMINATOR. They will reveal that the band isn’t about showcasing their musical skills or infusing nice melodies to impress little fangirls—instead; ELIMINATOR goes straight for the throat and delivers straight-forward, vicious Thrash Metal reminiscent of the classic Teutonic sound and 80’s/early 90’s American Death/Thrash. The tempo is for the most part quite fast and furious with a strong implication to albums like ‘Endless Pain’ and ‘Infernal Overkill’ . The album opens with the instrumental ‘Raging Shrapnel Hail’ and right from the beginning the fucking riffs are absolutely shredding your skull to pieces. The second track ‘Merciless Beast’ storms forth to proceed on the aural assault on your senses with vocals that sounds nothing short of ballistic. There’s nothing really “fresh” about Krieg Thrash; nothing the Thrash Metal aficionados haven’t heard all before— but boy, do they rip it up with the best of their abilities. Without a doubt, the band’s sound is archetypal of what Thrash today should sound like. These maniacs possess the spirit of the 80’s and are here to claim your soul.
Posted by Vagabond at 4:07 PM