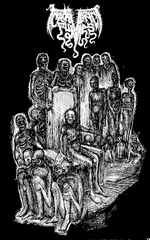 Rising from a grave somewhere in France back in 2011, Cadaveric Fumes play a style of old-school death metal that puts them in a similar category to bands such as Grave Miasma, Funebrarum and Cruciamentum. Whilst not being very original; their mish-mash of different OSDM styles sets them apart from your usual Dismember or Morbid Angel clone bands and breathes a bit of fresh air into the overcrowded "new-OSDM" scene.

In CF's melting pot, you will find a dash of Autopsy, a smidge of Entombed/Dismember/Grave worship (but just a smigde...), a healthy heaping of ancient Finnish death metal and a few sprinklings of Incantation's cavern-crawling darkness. As you can probably gather from the mentioned influences; the instrumental parts range from soulcrushingly slow to mid-paced stomps and even incorporate the occasional blast beat, although the blasts are used sparingly. The bass tends to follow the guitar riffs, for the most part, but presents a very dark tone, which adds a lot of dimension to the atmosphere, as do the tasteful yet scarce synths. The vocals have a decent range, often changing between deep gutterals and high pitched screams within the same song.

The production is deliciously dark and ancient, suffocating the listener whilst still allowing the morbid tunes plenty of room to breathe. "Macabre Exaltation" sounds very professional, especially for a band's first demo. Whilst originally released on tape and limited to 300 copies, "Macabre Exaltation" has recently been repressed on vinyl through Blood Harvest, so there is no excuse for you morbid death fiends to pass this one up.