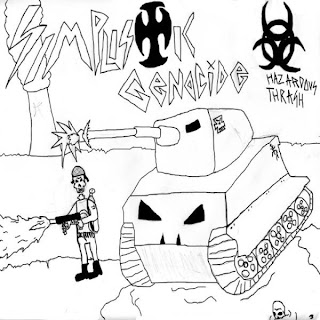 Simplistic Genocide are a Thrash Metal band hailing from Connecticut USA. I don't know much else about them aside from the fact this is their first demo and it shows a lot of potential, under the low quality production and obvious DIY attitude.

The intro and opening track set the mood quite well and you know right from the get-go that you're in for some straight up, punky as fuck Thrash Metal. The production quality is pretty bad, but you can still hear enough of what's going on to know what these guys are all about, and it adds a touch of personality to the music. Not that this group need any more personality added, they have great charisma.

While the production may be low-fi, you can still here all the instruments (yes, even the bass!) and the songs still kick plenty of arse. The best way to describe their sound would be a mix of crossover punk attitude and thrash metal aggression. My favourite track off this demo would have to be the second track "Dying on the Front Line", it's simply a kick-arse fast thrash number that reminds me of crossover era Sodom.

All in all, Simplistic Genocide aren't trying to do anything new or original, rather just sticking to what they like and having a good time doing it. There is a lot of potential shown in this demo, and I would love to hear more from these young'uns in the future.

www.myspace.com/simplisticgenocide
Posted by Vagabond at 5:27 PM