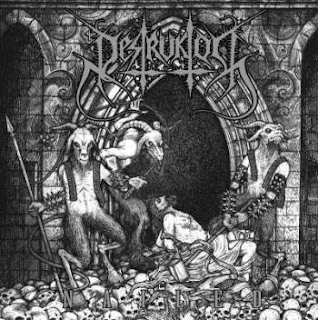 What we have here, is the long-awaited full-length album by Australian War Metal horde Destruktor. Something I spent a LOT of time anticipating!

These boys play a mix of Black, Death and Thrash Metal. Over the years they have combined the mixture in different ways, starting off with a more straight-forward Black Metal approach on their first demo, then going for a bestial Black Thrash assault on the Brutal Desecration EP, then a more Death Thrash sound on the Nuclear Storm EP. Nailed, however, goes in a very Death Metal direction, whilst still keeping strong Black and Thrash Metal influences, it is clear that the old-school Death Metal sound is now the most dominant influence.

The album kicks off with a slow, brooding intro that kicks into a smasher of evil Death-thrashing awesomeness that is the song “Embrace the Fire” which hastily sets the mood for the rest of the album. Every song on this album is a relentless blasting assault on your ear-pussy that simply crushes and forces it’s way into your head. The songs are generally mid-length, catchy, fast and evil. There is a bit of overkill when it comes to blast beats, but it seems to work here, it just fits with the mood.

My personal favourite tracks would have to be Violence Unseen and Meccademon. It’s hard to choose a stand-out, though, as every track is killer. This album is not for the faint hearted, it is old-school, heavy, evil and has riffs that kill! This is Australian Metal played the way it should be played.

www.myspace.com/666destruktor
Posted by Vagabond at 6:57 PM