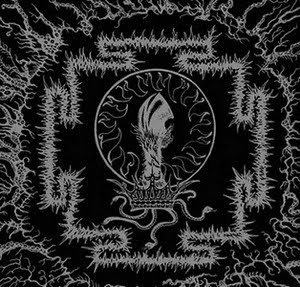 What’s that, you say? A new release from the master of Canadian War Metal himself, Pete Helmkamp, featuring J. Read of Conquerer fame (but NOT a new Revenge album)? 4 songs of bludgeoning black/death metal aggression? Well, then, this sounds right up my fuckin’ alley!

Any fan of Helmkamp’s older projects (namely Order From Chaos and Angelcorpse) should know what to expect here: highly energetic and aggressive, blasting straightforward black/death metal with sinister vocals and super-fast riffage. The production is quite clean for such a release without going overboard and sterile, so you can hear everything that’s going on, which is nice.

This has got to be one of the most savage releases I’ve heard recently. Everything about this record is intense, from the insane yet controlled blast-heavy drumming, to the intense Angelcorpse-style riffage, to the surprisingly audiable bass, to Pete’s evil-as-fuck foul rasp shouting at you through the speakers. The songs here conjure up images of ultra-violent and uncompromising warfare, which nobody is safe from.

The first and final tracks here probably stand out the most for me, with the middle two also excellent. I really can’t get enough of this EP, and strongly urge you filthy warmongering bastards to do whatever you can to get your hands on it.

www.nwnprod.com
Posted by Vagabond at 8:54 PM