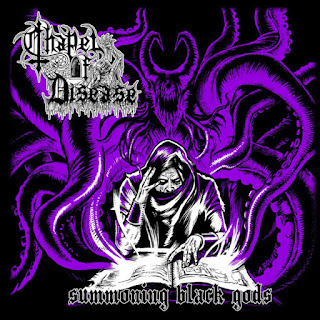 Chapel of Disease formed back in 2008 in Cologne, Germany. Prior to releasing this, their debut album, the band put out  a demo and a split, all within the year 2012.

Chapel of Disease make no bullshit secrets about where their influences lie; their music is pure early 90's death metal music, akin to bands such as early-period Death, Asphyx, early Pestilence, early Sepultura, Pentacle, Grave, Bolt Thrower and Obituary. Chapel... aren't just your average clone-band, however, as they manage to inject their own flavour into an ancient musical recipe, mixing dark and sinister atmospherics with a morbid guitar sound acentuated by killer bass tones, subtle melodies and a very organic drum sound.

Yeah, they will sound like a "copy" band to a lot of people, but that's not always a bad thing, if the music is presented as well as this. Most OSDM fans won't be able to resist the infectious riffs, Van Drunen-esque vocals, varied drum work and killer solos presented on this collection of well-writen material.

No true death metal maniac will be able to argue with tracks like " Summoning Black Gods", "Dead Spheres", "Evocation of the Father", "The Loved Dead" or any other song featured on this release. These Krauts are definitely not breaking any new ground, but with "Summoning Black Gods", they have released a strong album worthy of standing alongside killer "new-OSDM" acts such as Ataraxy, Voids of Vomit, Dead Congregation,, Excoriate, Omision, Vanhelgd, Gorephilia, Insepulto, Terminate and the like in my collection, hopefully you find them worthy of your collection, too!