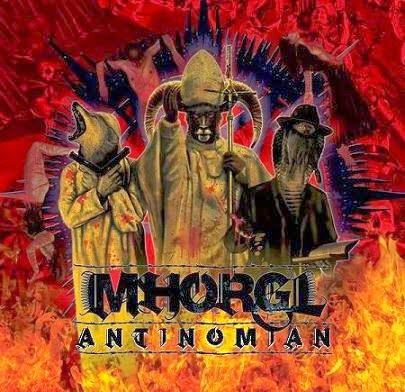 MHORGL produce an energetic and complex style of Black Metal that incorporates the elements of Thrash and Death Metal. One thing you will notice about MHORGL, is that they are far more than your typical Black/Death/Thrash amalgamation, rather, the band implements their focus on creating a most memorable atmosphere. This is best exhibited through their fast, shredding riffs, with timing so perfectuous, it beckons at the thought that they may perhaps be cybernetic robots. The melodic aspect is quite prominent, but do not fool yourself to believe that they dwell in the same realms as wimpy bands such as Soilwork or In Flames. In fact, the music in question can sometimes be a bit too much to bear due to the heavily complex nature of the songs (think Gorguts or Cryptopsy, although, on a slightly less technical scale) and of course, not to forget, the absolutely face-melting battery each track delivers courtesy of Mr Louis Rando. I'm telling you, this motherfucker beats the living shit out of his skins. I'm rather adamant that Louis may just be one of the most technically proficient drummers from down under, there is no doubt as to why he is such a handy recruitment.
It is only fair in my view to refer to MHORGL's style as "Melodic Black Metal", albeit, as I pointed out previously, the music is pretty brutish and conjures up feelings related to (old) GORGOROTH, SETHERIAL, MELECHESH, and of course, it's increasingly difficult to not mention THE FUROR here, since they do share some of the same members. Throughout the course of this disc you will find many solid guitar harmonies, frenzied tremelo picking, including rapid and precise drumming, throbbing bass riffs, and not to forget, the evil vocal rasp of vocalist Sam Moretta. There is definitely an experimental/progressive touch on some of the songs. One clear example of this is the weird, yet intriguing, polyrhythmic riffing found on "Kiss of Midnight".

"ANTINOMIAN" comes with a professional package well suited to the spectacular album cover, which was done excellently by the bassist, James Cambell, and is basically a connotation that refers to the hypocrisy of organized religions and how they tend to set moral codes for their followers, yet the organizations themselves seem to discount these same values in the pursuit of political and financial gain. All together, we're looking at 8 tracks throughout its course and clocks in at a satisfying 36 minutes.