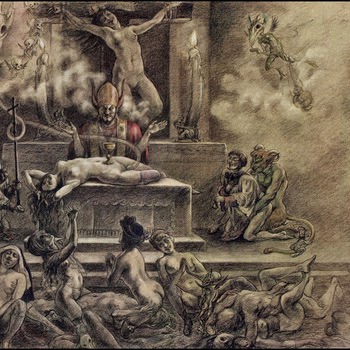 Druidus from Saskatchewan, Canada – produce an abstract and raging brand of chaotic black/death, which should appeal to the most diehard of devotees of the genre. The demo in question features four brutish compositions, including a killer cover of Black Witchery’s ‘Unholy Vengeance of War’ – which sounds fucking deranged to say the least, but with a depraved touch of its own. Druidus’ style is a little different compared to their contemporaries, in the sense that they incorporate some crust/­hardcore influences. This approach seems to work really well for them. The vocals are shared between two band members, and are ravaging and fierce, giving the music a powerful element. The atmosphere created is putrid and shrouded in pure fucking evil, with the instrumental side of the music being rather well implemented and carried out with conviction. From start to finish, this demo is pure pedal to the metal mayhem. This band is definitely recommended if you enjoy the brutal and abyssic resonance exhibited by bands such as Bestial Raids, Nuclear Desecration and Profanatica. I'll also include that there will be new material from the band on an upcoming split with Canadian warmongers, Goathammer, which sounds even more tumultuous than the material featured on this demo.

Great review, made me want to check out the band out, and I must say that the description is dead on! Hails!!