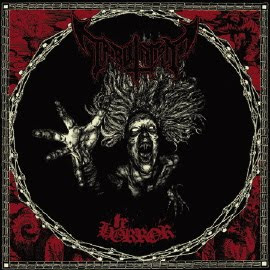 Oh Swedish Death Metal, how I love thee oh so much.

Tribulation play a heavy, fast and thrashy blend of old-school style Death Metal. Their sound best reminds me of Kreator at their most DM (especially vocal-wise, think Mille's vocals on Pleasure to Kill and Endless Pain, but more screechy) and Morbid Angel at their thrashiest. I would almost call this album Death Thrash, but not quite, as it has a more DM vibe.

The riffs on this album, while not being terribly original, fucking slay, that's all I can really say about them. I did not find a single song on this album that didn't have me banging my head like a maniac. The vocals are like the bastard child of early Tom Angelripper, early Mille Petrozza and early Dave Vincent mixed in with their own personality.

As for stand-out tracks, I'm not sure if there is any, maybe Spawn of the Jackel, which reminds me of a blinding rifftastic Rigor Mortis tune with Mille Petrozza on vocals. Which is not necessarily a bad thing, but a bit more variety would be great, not to say there isn't variety because there is plenty to be found within the songs here. I just seem to listen to this album as one long and awesome song, rather than a bunch of great songs.

All in all, this is a great album. I HIGHLY recommend it for anyone who has a problem with the Death Metal scene as of late, as these guys offer a much needed breath of fresh air and originality mixed in with good old fashion trashing metal of DEATH! Great stuff.

Special mention should also be made for the cover art, talk about evil!

http://www.tribulation.se/
Posted by Vagabond at 4:14 PM