Erebus Enthroned are a black metal band from Sydney. Formed in 2006, they have been steadily getting their name out there with the 2007 release of their debut demo, a split with fellow Aussie black metal horde Nekros Mantia in ’09 and they also took part in a compilation entitled “Tlat De-Pur Anuta” alongside bands such as Ofermod, Nefandus, Glorior Belli, Sanguinary Misanthropia etc. Tomorrow, on August 12, 2011 they unleash their debut full length album “Night’s Black Angel” on the world… 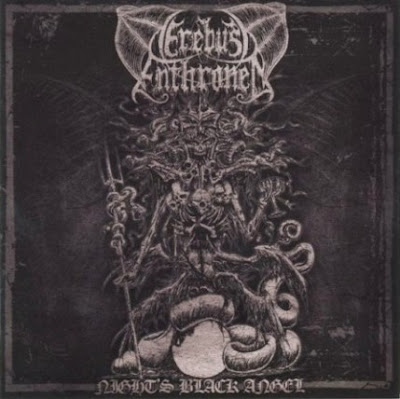 The band have a pretty unique sound. I can hear obvious influences from more “melodic” bands such as Dissection and Watain as well as hints of black/death a la Destroyer 666 and a sense of “epicness” that is present throughout the album, all in all though, this is a pretty “traditional” black metal album with some cool extras thrown in. They took their time on this release and it really shows.

The production is crystal clear and you can hear everything that’s going on, and there’s a lot going on! The songs are full of twists and turns, headbanging catchy as hell riffs, venomous vocals, interesting drum patterns, and actual audible bass, which is a rare thing for underground black metal. I really can’t find a fault with the sound here at all.

My favourite track is the opening song “Enthroning the Harbinger of Death”, but every track is stellar and can not be skipped. This album is miles ahead of what most black metal bands are currently doing.

For fans of; Funeral Mist, Watain and Antaeus.