2011 has been a great year for death metal, with great albums coming from all over the place. Bands such as Blessed Offal, Kerasphorus, Innsmouth, Horrid, Blaspherian and Disma have all put out killer releases, and as you can tell when listening to each of the aforementioned bands; there is plenty of variety within the realm of “new-old-school-death-metal”. 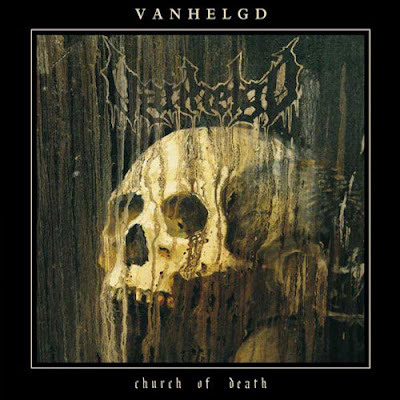 Vanhelgd hail from Sweden and were formed a couple of years ago (2007 to be exact). Since forming they have put out one full length (2008) and an EP (2010). “Church of Death” is the title of their second full length, released in April 2011. Heed my warning people; this is NOT your typical Swedish death metal…

So, a band from Sweden that doesn’t turn up the HM-2 pedal and assault you with hard-hitting riffs and constant d-beats? Not very common now, is it? Vanhelgd takes a very different (yet familiar at the same time) approach to old-school death metal. Influences from Dissection’s dark melodies, Asphyx and Hail of Bullets’s militant pummeling and Bolt Thrower’s slow tempos. The guitar tone is untypical, yet still very death. The vocalist is a near dead-ringer for Martin Van Drunen. The bass is reasonably audible and does its job and the drumming is rather varied.

“Church of Death” is one of the most varied death metal albums I have heard in a long time and I personally can not find a single flaw on this release in terms of the songs, although to my ears, there is something a bit off about the production, but that could be just me. My favourite track is the very dark closer “Alone With the Dead” and I consider every other song to be equal to each other in terms of greatness. There really is not a single boring moment here, this album will take you on a dark, yet brief, journey to the depths of hell. Get your arse over to Nuclear War Now!’s webshop and buy it.