Bones are a crusty death metal group from Chicago consisting of a few “veterans” of the Chicago metal scene, all three of which are former members of the relatively well-known black/thrash outfit Usurper. 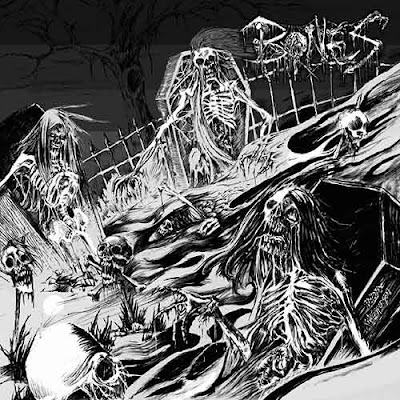 “Bones” is a consistently unrelenting album that bludgeons from start to finish. You can expect heavy, hard hitting riffs with a cool tone that lies somewhere between early Master and many straight up d-beat/crust bands. The vocals are more on the thrash/crust side of things, delivered in a shouty and aggressive manner. I find the drumming to be quite varied and not just relying on using the d-beat as a lot of bands who play in this style tend to do.

Don’t put this album and expect complex mind-bending metal, because that’s not what you’re gonna get. Bones are clearly influenced by bands such as Motörhead, Discharge and their legendary hometown heroes Master. These guys rely more on sheer volume and brutal force rather than catchy riffs and beats (although the songs are still catchy, in my opinion) to grab your attention. This album really is a case of “everything louder than everything else”, and it shows in the killer production job as well.

Every track on here is a pure bludgeoning representation of the term “death metal”, fast, loud and relentless. It’s difficult to choose a favourite track here, as I don’t feel the urge to skip through any of them and enjoy listening to the whole album in a single setting pretty regularly but the songs that I think stand out the most are the opener “March of the Dead”, “Bitch”, the Devastation (Chicago Devastation, not Texas) cover “Apocalyptic Warrior”, “Good Die Young” and “666”.

Get this album to fill that crusty, ugly and evil death metal void in your life.