Blasphemous Noise Torment is a black/death metal band from Italy who formed in 2002. “Ancient Insignias is their debut full length, released way back in January this year. 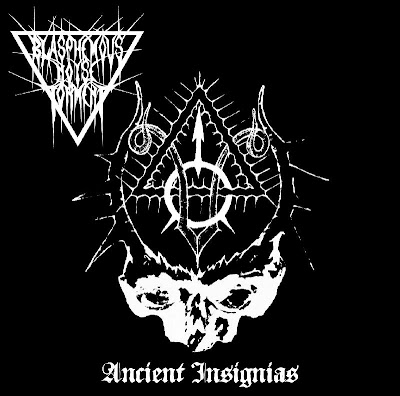 The album starts off with a militant intro that features boots marching under a militant guitar riff in the form of the title track. This sets a mid-paced yet warlike vibe that remains consistent throughout the album. The overall sound is not something you would usually expect of a band called “Blasphemous Noise Torment”… I personally was expecting something in the realm of Blasphemophagher and Revenge’s all out grinding war assaults, but BNT tend to borrow a lot more from Bolt Thrower’s mid-paced war march sound and chuck in a bit of a gritty, punkier edge (Amebix and Axegrinder HAVE to have influenced this!), that’s not to say the album is devoid of blasting chaotic madness, though.

The production suits the sound in that it’s polished enough to hear everything that’s going on, but still has a raw and dirty edge to it. The vocals reminds me most of Nocturno Culto on Darkthrones newer albums, which was unexpected but certainly not unwelcome, they sound nasty as fuck! The guitars are distorted and evil sounding, complimented well by the equally distorted bass sound. The drumming is varied and keeps things interesting.

There’s not a bad track or boring moment to be found over the 40+ minutes “Ancient Insignias” runs for. If you’re after something different to your usual “war metal” sound, I’d highly recommend checking out Blasphemous Noise Torment, as they’re one of the most original bands I’ve heard in the genre and these Italian bastards really bring their own style to an overcrowded scene.