Recently I received an email from a record label called Hellthrasher Productions containing a couple of review requests that I happily agreed to look into since they asked nicely. Polish black metal horde Demonic Slaughter’s latest full length is one of those releases. I don’t know much about Demonic Slaughter but they’ve been around since about 2006 and put out 2 EPs and 3 full lengths so far and “Revelations of Death” is their third full length. 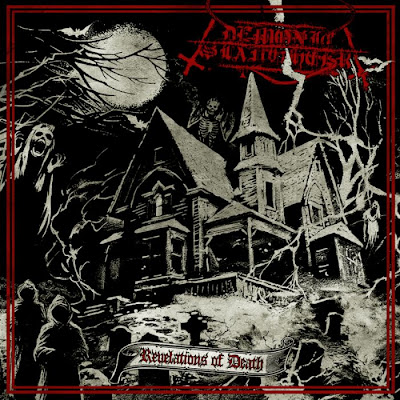 I haven’t heard any of their earlier material so I can’t make a comparison between the new and old stuff, but what I can tell you is “Revelations of Death” isn’t your typical black metal and the band incorporates a large Swedish death metal influence in their riffs, plenty of variety in the vocals ranging from death metal growls to blackened howls to Inquisition-esque “chanting” and the drumming is rather varied and the bass surprisingly audible for this type of metal.

It’s always refreshing to hear a black metal release full of actual songs that are catchy, chock full of riffs and go somewhere… I find myself hearing so much stale black metal albums which just go nowhere and repeat the same crap over and over that it’s gotten to the point where I’m very weary when looking into new black metal bands. Some of the more ear catching tracks here are; “Chant of the Graves” (probably my all around fave off the album), “Prayer of the Accursed” and “Communion of Dissolution”.

Demonic Slaughter aren’t exactly making waves of innovation or reinventing the wheel in any way at all and this won’t be remembered as the best release of 2011 by any means, but they play a decent brand of black/death metal and they do it well and I don’t think you can really ask much more of a band in this day and age.