What we have here is an untitled split featuring two demos from two killer up and coming death metal bands. Side one is a Greek band called Resurgency who feature members of Necrovorus and Stagnate and this is their first demo entitled “Dark Revival”. Side two is the second demo of Swedish band Desolator entitled “Mass Human Pyre”. I’m not going to compare the two bands and say one is better than the other, because that would be fucking stupid when both sides are of such high quality. What I am going to do, however, is discuss why this split is an excellent homage to all the things that make old-school death metal great and hopefully convince you, the reader, to check out these two bands. 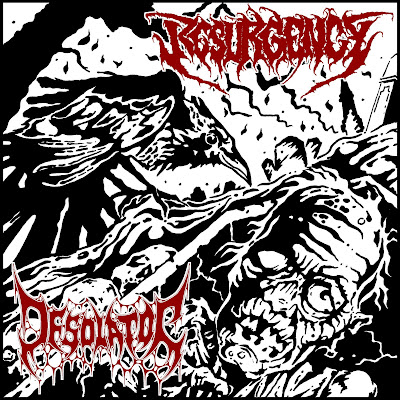 It seems these Greek fellows are influenced from just about every OSDM scene there is, and to my ear they most resemble the sound of early Vader, Sinister and Morbid Angel. So you can pretty much guess the kind of riffage and tone Resurgency delivers. This side of the split has a better production job than the Desolator side although the bass is pretty vague and often drowned out by the guitars and vocals. The best of these 4 songs would have to be the opener “Where Despair Dominates” in my opinion. All 4 tracks are stellar and leave you hungry for more Resurgency.

Now for Desolator, who bring forth a filthy Swedish death metal assault. Chainsaw guitars, d-beats and an all-around grittiness is the order of the day here. The intro track “Conjuration of the Watcher” gives off a distinctively medieval feel with it’s chanting and cries of “Arise! Arise! Arise!” leading into the opening riff of “Mass Human Pyre” which really gives the feel of some foul beast arising from the depths of the earth. This side is raw old-school Swedeath, nothing more, nothing less. And it’s fucking brilliant.

In a nutshell; neither of these bands are trying to do anything new or grab your attention using wanky show off tactics. They simply conjure up the old death metal spirits and do a damn good job of it. This is everything I could ever want from a death metal split.