Heresiarch is a 5-piece bestial black/death metal band hailing from New Zealand and featuring a couple of members from Diocletian and Witchrist, among others. Fans of those two bands in particular should have a rough idea what to expect from this war mongering horde’s first EP and second release “Hammer of Intransigence”… 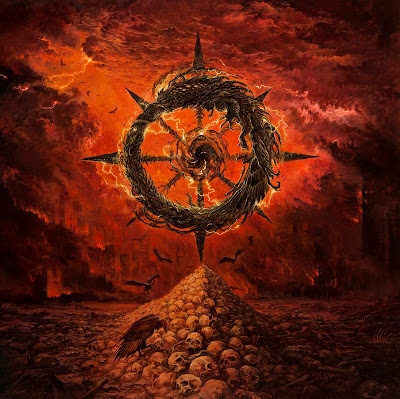 One thing that I should mention firstly about this release is the production: it’s really clear and crisp for this type of music and you can hear every note played on the bass, every bash on the kit, the furiously belched vocals and the crunchy guitars. Nothing overshadows anything else and the EP is mixed really well.

The songwriting is top-notch chaotic and bestial war metal with slowed down doomy passages spread throughout. The band sounds like a mix of Diocletian, Conqueror and Bolt Thrower… a bit of an odd mix, but they pull it off. If there’s one thing this horde knows; it’s the balance between all out fury and slowed down crushing darkness. The best songs on here would have to be “Carnivore”, Iconoclasm”, “Thunorrad” and the title track.

All in all, this is a killer little EP and I can’t wait to catch these guys live at Evil Invaders IV in June 2012.