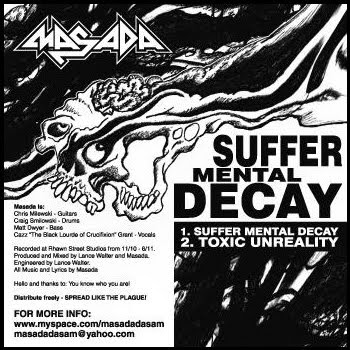 Masada are a pretty new (formed in 2008) death metal band from the US featuring members of Immolation, Gorephobia and Grand Belial’s Key among others. Judging by the bands that Masada’s members have previously played in, obviously you should not let yourself be fooled by the logo and album art into thinking this is just another generic throwback thrash metal album… Masada play pure and unique old-school death metal without compromise.

Most of the demo crawls along at a creeping mid-pace, but at times they pick up into furious speeds. The production here is excellent for a demo, every instrument can be heard but there is still an eerie sense of murkiness lurking in the mix. Catchy bass lines and varied unique drum patterns are used to create a sense of technicality not unlike Finnish legends Demilich.

Not much more can be said about this 2 song, 6 minute demo except that it’s a killer slab of OSDM drenched in a dark and moody atmosphere that leaves you wanting more. I, for one, will be eagerly awaiting more from these guys.