Necrovorous – Funeral for the Sane

Necrovorous is an old-school death metal sounding band hailing from Greece who have been around since 2005 and been steadily releasing material since their formation. “Funeral for the Sane” is their first full length. 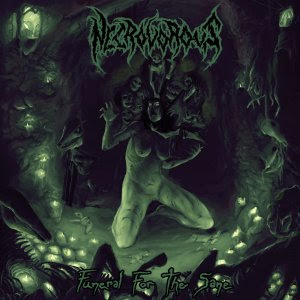 There is a variety of influences evident on “Funeral for the Sane”, the obvious ones being Autopsy, Incantation and Entombed, so it’s a bit of an OSDM melting pot. Slow dirges mixed in with all out filthy blastfests and ugly d-beat driven groovin’ sections. The production is pretty clean but still raw enough that even the most lo-fi obsessed death head will find their head banging along to the tunes.

The guitar has a classic death metal tone to it, the bass is audible, the vocals reek of John McEntree and the drumming is varied as all fuck. This album ticks all the boxes for a completely solid death metal album and I find it rather strange that I haven’t heard much about it when discussing 2011 releases with other metal fans. I guess these guys have flown under the radar a bit, due to all the other killer DM that’s been put out this year.

If you consider yourself a fan of old-school sounding death metal at all, do yourself a favour and look up the tracks “The Vilest of All Dreams”, “Deathknells”, “The Spawn of Self Abhorrence”, “Dwellers of my Flesh” and the title track. You’ll regret missing out on one of the best death metal releases of 2011 if you don’t!

This was pretty f***ing awesome. Worst Metal album covers ever! My only question is…..how deathly hardcore and bad-ass can you be if it take you 2 hours to put on makeup everyday?
http://doodiepants.com/2010/09/03/worst-heavy-metal-album-covers/