Vallenfyre are somewhat of a death metal “supergroup” from the UK featuring current and former members of Paradise Lost, My Dying Bride and At the Gates. Their sound can best be described as early Paradise Lost mixed with some early Swedeath influences and a bit of Bolt Thrower and Asphyx-esque mid-paced riffage thrown in for good measure. So far they’ve put out an EP entitled “Desecration” and their debut full length “A Fragile King”. 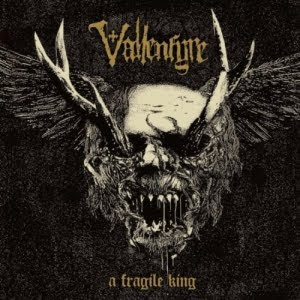 The guitars have that early death/doom “gloomy” feel to them, as well as a Swedish buzzsaw feel in the faster tracks, the bass plods along and mostly just follows the guitar but still has an immense presence, the drums are quite varied and do their things well and the vocals are deep and menacing, sounding like a more developed Nick Holmes in the early Paradise Lost years. The production is great, it’s pretty clean yet suitably dark and murky at the same time.

As you probably gathered when I mentioned the influences, the album is rather varied and no two tracks sound the same. Lots of contrast between the doom and gloom moments and the more neck-breaking parts, which keeps things interesting. My favourite tracks off this would be the opening track “All Will Suffer”, “Desecration” (which totally reeks of Paradise Lost), “Ravenous Whore” (which wouldn’t sound out of place on a newer Swedeath album) and the mid-paced stomper “Cathedrals of Dread”. I realize I did just name the first 4 songs in a row as my faves, but there’s a reason behind that; it gets a bit stale on the second side and I can’t help but think they should have made the album 10 minutes or so shorter, but in saying that, the second half still has it’s moments and shits all over a lot of the younger bands out there.

All in all this is a pretty solid release and I’m really surprised that I only heard of this band a week or so ago and never really heard/read any buzz about them. It’s a great mix of death/doom and straight up death metal. Sure, the album should have been a smidge shorter but I’m not one to let that sort of thing ruin it for me.