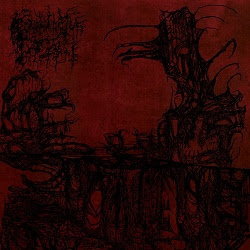 Prosanctus Inferi have been around since 2005, but I didn’t expect to hear anything new from these ripping black metal bastards following the suicide of their drummer Antichristus in 2009 and the post-humorous release of their debut album “Pandemonic Ululations of Vesperic Palpitations” in 2010, but main man Jake Kohn has soldiered on with new drummer Jeremy Spears and put together a killer follow-up EP entitled “Red Streams of Flesh” on Nuclear War Now! Productions.

This EP is so straightforward it’s almost ridiculous, but that’s the beauty of it. Fast paced tremolo riffs, evil as fuck vocals that bring to mind Paul Ledney’s work on Profanatica’s full lengths and songs that are always running along at full speed. Fans of intense bestial bands such as Archgoat, Revenge, Blasphemy, Angelcorpse and (very) early Morbid Angel will love this; anyone else will probably hate it, but fuck those guys.

The production is filthy as ever yet weirdly accessible and fits the music immensely. Running at 19 minutes, the listener doesn’t have time to get bored and will just find them self lost among the primitive brutality. “Red Streams of Flesh” doesn’t differ much at all from their previous efforts, but I do personally consider it an overall improvement to their most recent release.