Em Ruínas are a speed metal band from Brazil who have been around since 2002 but only put out two demos and a full length so far. “… From the Speed Metal Graves” is their debut album, released this year on Mutilation Records. 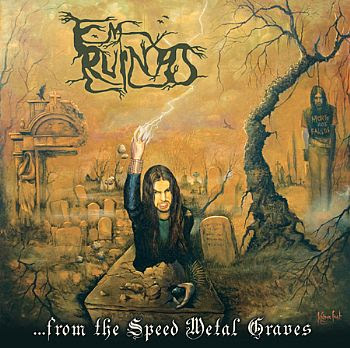 These guys don’t fuck around and the album instantly kicks it up to high gear with the second track “Burn in Hell (The Self Damnation” after a brief intro. Expect ridiculously fast and heavy riffs, mid-high pitched vocals with a Lemmy-ish rough grittiness to them, punky drumming and reasonably audible bass. The production is a bit weird and jumps around in quality from song to song, but I didn’t find it effecting my listening experience in a negative way and grew accustomed to it pretty quickly.

My two favourite songs off this release are “Morbid Pits” which kicks off with a battle cry of “SPEEEEEEEEED MEEEEEEETAL” and proceeds to melt the listener’s face off and “Headbanger Race (Warriors of Tomorrow)” which is just a ridiculously fun song that kicks all kinds of arse. To be fair, though, stand-out tracks are going to differ from listener to listener as each song is a great example of old-school dirty and raw as fuck speed metal played the way it should be.
A
s I’ve often said in past reviews and will say again in future reviews; if you’re looking for something fresh, innovative and original… piss off!