Well, it seems I have received good feedback on my first montly old-school review, so I will continue digging through my collection for something that deserves your attention each month! So here’s some underrated (in my opinion, at least) German thrash…

Necronomicon formed way back in 1983 but didn’t get a demo out until 1985 (they released 2 demos that year, actually) and released their debut self-titled full length in ’86, so I guess they kind of missed the ball on the whole “German thrash explosion” thing which prevented them from getting the kind of recognition that has seen Sodom, Kreator and Destruction heralded as 80’s thrash metal giants.

What can thrash aficionados expect from this album? How about something that sounds very similar to early Destruction? Snarling Schimer-esque vocals, crunchy guitars and killer riffs to match and competent drumming. Sadly, the bass seems to drop in an out here, but I think that’s more of a production problem which is unfortunate because aside from this small detail I think the production is perfect (keep in mind, though, I have the reissue which was put out in 2007 by Battle Cry records, which also has a different tracklisting to the original).

One thing about this band that will stick out to most listeners is the Destruction comparisons, which unfortunately can’t exactly be avoided, but I think it’s very unfair to the band to refer to them as a “poor mans Destruction”, because if you can ignore the comparisons I think you will find plenty to like with this band and their releases (the third full length “Escalation” is essential German thrash listening). Infact, after listening to this band for a long time, I actually prefer them over Destruction.

For me, the standout track on this album is “Possessed by Evil”, which is an absolute stomper of a thrash metal song and I would put it up there with the likes of “Riot of Violence” by Kreator and “Nuclear Winter” by Sodom. In other words; it’s a classic track!

The big let down with “Necronomicon” is that the tracks are pretty inconsistent with a lot of hit-and-miss going on, but they redeem themselves with tracks like “Possessed by Evil” and “Magic Forest”.

I would recommend this album and band to every old-school thrash aficionado out there. Give it a chance, and keep in mind, the band does improve on their later releases, so don’t be too put off by the sloppiness of their debut, if that’s the kind of thing that puts you off. 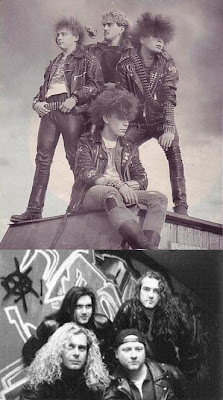