Formed in 2004, Swedish band Portrait have been making waves in the underground since the release of their debut self-titled full length back in 2008. I haven’t heard the debut full length as this band has flown pretty low under my radar until recently, but what I can tell you about the new album “Crimen Laesae Majestatis Divinae” is that it’s a dark mixture of Mercyful Fate worship, old-school German heavy metal (Helloween, Blind Guardian, etc) and 80’s speed metal. 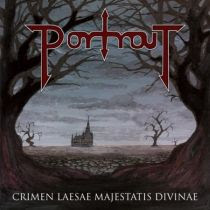 This is an album that grabs you by the throat instantly, opening with the energetic “Beast of Fire”, which sets the old-school fist pumping metal vibe that will carry on throughout the whole album. High-pitched vocals, epic guitar solos, headbanging riffs, it’s all there. The makings of a killer heavy metal anthem!

The guitar work throughout every song is a definite highlight, consistently mirroring Hank Shermann and Michael Denner’s shredding on the earlier Mercyful Fate releases. Per Karlsson’s vocals certainly echo the great King Diamond (albeit with a lower register voice) with high-soaring falsettos and sinister howls, but he also has his own voice and isn’t about to sing in a Mercyful Fate tribute band or something. The drumming is competent and drives each song along nicely. Bass isn’t very audible, but you can still “feel” it.

The production might be a bit too “clean” for some blokes, but as far as I’m concerned it’s nothing worth complaining about and suits the music fine. I reckon it gives a nice mix of “raw and polished”, which is also how I would describe the music; they are a raw heavy metal band who know their chops and have a tight-knit structure.

Most of the songs are reasonably long, going over the 5 minute mark, excluding the instrumental third track “The Wilderness Beyond” but they don’t get boring or stale, each of these tracks stand on their own merit and keep my interest the whole way through. My personal standout tracks would be “Bloodbath”, “Darkness Forever” and “The Nightcomers”, funnily enough these three tracks play in succession, so you could also say the “middle” is my favourite part of the album.

All in all, Portrait may have a sound that derives a LOT from Mercyful Fate’s legacy, but they are a band who truly shines as their own entity and stand out from the crowd of “revival” bands that seem to be everywhere at the moment. Anyone after some good old ‘eavy metal full of killer riffs and catchy hooks should track this gem down, this album is worth every cent.