As decided by popular vote in the recent poll I put up on the page, once a month I will be doing a feature on one or more lesser-known releases that I consider to be underrated and worthy of being heard by more underground metal fans, or lost classics of various metal subgenres and scenes. You may have already discovered these bands, which is fine, my purpose here is to open up more underground music to the ears of fans who have not had the chance to hear these old-school gems. And now, for my first Arisen From the Crypt feature, I give you an old-school Australian thrash metal classic… 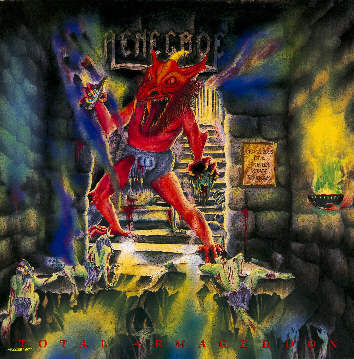 Renegade were one of the earliest Australian thrash metal bands, formed back in 1983, yes kidlets, that’s 2 years before the highly overrated (but still pretty good!) Mortal Sin and 3 years before the legendary Hobbs’ Angel of Death! Recently reissued through The Coffins Slave, “Total Armageddon” is the only LP these guys ever put out (in 1987, a great year for metal), and it’s a good ‘un!

The album opens up with the track “Necromancer” which gets right down to business with lightning fast riffs, pounding drums and mid-high range vocals, giving you an idea of what’s to come on the rest of the album.

Renegade had more of a traditional/speed metal sound than most other early Australian thrash bands. A straightforward 80’s heavy metal guitar tone with lots of distortion used for a “crunchy” effect. Straightforward drums that keep the pace going. Mid to high pitched vocals. The bass is there, but not very audible. The band obviously focused a lot more on energy rather than technical proficiency, which sits perfectly fine with me! The riffs are catchy as hell and the vocal lines fit in just fine so you’ll be air guitaring and singing along in no time.

My favourite song on here is the excellent third track “Black Ritual”. It’s just a solid and catchy 80’s metal song that any fan should enjoy. The demo version bonus track on the end of the reissue is a treat too, as are all the bonus tracks.

As far as 80’s thrash metal goes, these guys fit in the ranks of bands such as Onslaught (UK) and Destructor (USA), in other words; catchy, energetic, loud, fast and evil metal! If highly energetic, raw and ugly satanic speed metal is your thing, then I couldn’t recommend this band more.

BUY THE REISSUE
Posted by Vagabond at 7:58 PM

Man, Hobbs' Angel of Death are playing in NSW soon, aren't they? Or did they already play... Man, I can't remember.

Yeah they're playing with Forbidden, Hellbringer and 2 or 3 other bands. Unfortunately for me, I won't have the cash to make this one! /sadface