Does early Possessed and Sarcofago worship sound like your thing? What about early Swedish “grooving” death metal a la Entombeds’ first two albums? And how about that Sadistic Intent? If you said yes to all three of these questions, then I have something special for you… 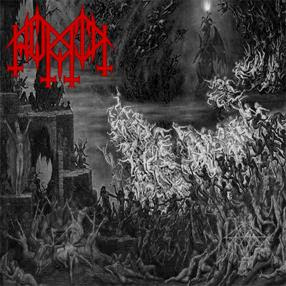 Horrid are a 4-piece from California who proclaim themselves “Blackened Deathrash”, personally I see them as more of a straight death metal band, but hey, who am I to decide! Formed in 2006, these maniacs unleashed their debut demo “Blackened Deathrash” in 2007, followed with their EP “Worship of Death/Invokers of Satan”. And now, in 2011 they have self-released their self-titled full length album.

Heavy and evil sounding guitar riffs? Check. Blast beats? Check. Audible basslines? Check. Some of the most sinister vocals I’ve heard from a “new” band in a long time? Check! If you played me this CD and told me it was released back in 1993 I would believe you. This is black thrashing metal of death, played the ancient way.

I’m not sure what else there is to say about “Horrid”, as the album really speaks for itself. The production is perfect, the sound is classic 90’s extreme metal and, hell, even the artwork is amazing and reeks of OSDM worship!

I really don’t think there is an overall “stand-out” among the songs here, as each one is equally as great as the last. So if you like one song, you’ll enjoy the full album. Basically, expect a mix of old-school South American bestiality, a bit of grooving Swedeath, and a bit of Sadistic Intent and early Possessed. What more could you ask for?!

BUY IT directly from the band.
Posted by Vagabond at 11:36 PM

there's also an italian band called HORRID but they are ridicolous and the guitar player is homosexual.

who?they one who called himself BELFAGOR?i'm from Milan and he is the city clow eheh
Claudio.