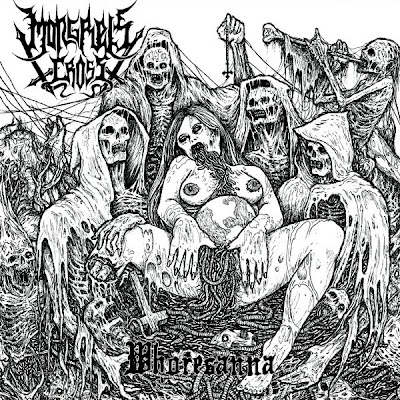 Mongrels Cross are a filthy three-piece black/thrash band from Brisbane, Australia, who have recently been getting their name out there with their new EP “Whoresanna”. I somehow ended up with a promo CD of theirs in my pocket at Evil Invaders III, after listening to it a few times I came to the conclusion that these guys are right up my alley and set to checking out the EP.

The band is clearly influenced by first-wave black metal bands such as Sarcofago, Hellhammer and Bathory as well as other Australian bands such as Vomitor and Gospel of the Horns and I can hear a decent amount of crusty punk in their sound as well. You can expect mid-range crusty “barking” metal style vocals that are nice and rough, a pretty punky guitar sound (obvious Motorhead influence on the riffage here), straightforward metal/punk drumming typical of thrash metal with a bit of d-beat thrown in for good measure and reasonably audible bass.

All three songs on this release tend to stick to a mid-to-fast pace and are very catchy. What’s not to love about Motorhead riffs and d-beats? I’d say track two, “A New Light” is my favourite on here, but all three are great and it’s hard to choose. If you’re looking for something super-original then you can piss off and go read some shitty hipster ‘zine. Mongrels Cross is where it’s at!