Daemon Foetal Harvest – Where It Dwells 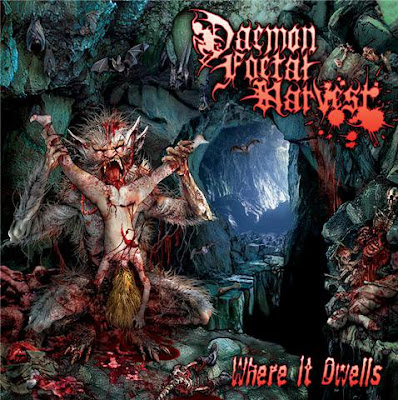 Daemon Foetal Harvest are death metal band from Wollongong, NSW, Australia (local to me! Ha.) who play a mix of old-school and modern style death metal. I would place their influences primarily in the early American scene, bands such as Malevolent Creation, Morbid Angel and most obviously… Cannibal Corpse (lots of blast beats and splatter movie type imagery on display here).

The production is very clear on this album, so you can hear everything that is going on but it’s not so clean that it sounds sterile. The guitar and bass sound is strictly early 90s American death metal which is driven along by competent drumming. However, the drums could use a bit more variety, as they mostly just blast blast blast all the way home, which leaves little room for variety within the actual songs. All that being said, the songs certainly are not BAD, they’re just a little too consistent.

Every track on this release is good, solid sounding modern death metal with salutes to the early American bands. These guys know what they want to achieve with their sound and they do it well. This style of death metal isn’t usually my cup of joe, but DFH hit the spot when I’m in the mood for that constant blasting “brutal” assault that so many bands TRY to pull off but fail miserably at.

There are plenty of manic noodly riffs and killer solos to keep any DM fan happy, however, the album is too consistent for me to choose any stand out tracks and I would rather just listen to the whole thing in one sitting regardless.
While not necessarily my style, this is a killer album and definitely worth the listen if you’re after some solid headbanging death metal.