Arisen From the Crypt Monthly Special #4: Excruciate – Passage of Life

Well, it’s that time of the month once again. Since there seems to have been a bit of a death metal thing going on here at camp Witching Metal recently, I figure it’s about time I bring one of Sweden’s greatest, yet lesser-known death metal albums to your attention. Excruciate were one of those bands that put out a few demos and a full length then disappeared off the map almost entirely. It’s unfortunate that they never released much material, but the material they left us with is, to sum it up in a word, excruciating. 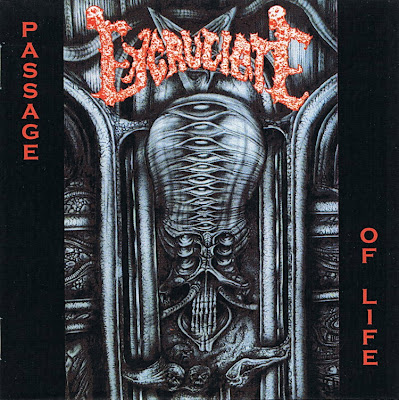 “Passage of Life” is a rather interesting album when you put it up against the usual Swedish death metal suspects; there’s not much in the way of driving d-beat rhythms shrouded in chainsaw guitar madness, as the band opts for a melting pot mixture of death metal sounds. Often within the same song you will find mid-paced Bolt Thrower/Asphyx moments alongside sloooow and suffocating Incantation-esque sections, all out thrashing riffs, NWOBHM style gallops and a few straightforward Nihilist/Dismember parts scattered here and there.

The production is absolutely perfect for Excruciates’ brand of old-school death metal, you can hear absolutely everything that is going on, but it’s still shrouded under a layer of darkness. The guitar sound is fantastic, and rather unusual for OSDM, as there are a lot more clean guitar parts then one would expect. The bass and vocals (special mention should be made for the vocalist, who has a great mid-low pitched growl that sounds very natural and menacing) are very high in the mix which adds a lot to the overall heaviness of the album and makes things that much more interesting. The drummer is quite talented and does a brilliant job holding things together throughout.

The songwriting is top-notch and you can tell the band spent a lot of time working on each song, there are plenty of tempo changes, interesting guitar solos and not a boring moment to be found during the whole 42 minutes that “Passage of Life” runs for. This is one of those albums that I just can’t fault or choose a favourite track from as every second is sheer old-school death metal darkness at its’ finest.