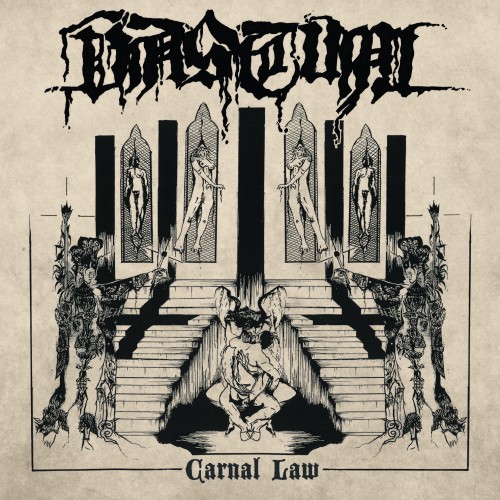 Vastum are a death metal band from San Francisco, boasting three members of established crust-death act Acephalix. Though Carnal Law is only their first demo, it's generated such a shockwave in the underground that it's been re-released on CD by 20 Buck Spin, and is due to come out on vinyl this month.

I don't say this often about death metal albums, but before listening to Vastum's Carnal Law, I would really recommend reading the lyrics. They're fascinating, both cryptic and crudely poetic, and I feel they unlock the proper state of mind with which the music should be approached. The liner notes include a couple long quotes that elaborate on the thinking found here, so a physical copy is neccessary to really satiate one's curiosity! From what I am able understand, they dwell on the carnal, violent, and unrestrained true nature of man, and express disdain for frivolous societal structures and status quos. No gore, Satan, or less stereotypical but still common esoteric, abstract, and fantasy themes to speak of. Vastum shine a light into the darkest, most primal corners of the human mind, and strip away all hypocrisy and pretention.

Musically, the band is equally stellar. Though they've frequently been labeled death/doom, this is to my ears simply mid-paced death metal with absolutely no blastbeats. On second thought, simply is probably the wrong word. Subtle, dark, primal mid paced death metal would be more apt. The riffs ooze a suffocating atmosphere, and instantaneously leap from a slow lurching pace to galloping but controlled violence. Occasionally, a guitar solo shines through the thick black murk, and god damn do they rule! There are a few squealing, dramatic solos, such as the two in "Devoid", and a couple more melodic numbers, such as the one that ends the title track, which is coincidentally my favorite track on the album. The vocals alternate between a mid-pitched, almost black metal rasp, and a deeper growl, nimbly delivering the lyrics in between ominous slabs of riffage, and really accentuate the atmosphere nicely, especially if one reads the lyrics. This doesn't especially sound like any other bands, but I suppose it could be compared to early Grave, and maybe even Six Feet Under if they didn't suck. I really don't want to discredit Vastum by comparing them to Six Feet Under, so I'd like to reassure any picky death metal snob reading this that Vastum are MUCH better than Six Feet Under, boasting more memorable riffs, a darker atmosphere, and sharing only their propensity for crushing mid-paced riffage.

Frankly, I can't stop listening to this. Carnal Law is quickly becoming one of my favorite death metal releases this year, and may even be my overall favorite of 2011. I can definitely see myself coming back to this again and again, the same way I do classic masterpieces like Altars of Madness and Into the Grave. Not to be hasty, but with the amount of attention this band is receiving after a single demo, I wouldn't be surprised if there are big things waiting for them in the future.