Coffin Dust is a young death metal band from Philadelphia over in the US who formed last year. So far they have released a split, which was put out in September 2010, and an EP entitled “Ancient Rites of Buried Evil” which was released in May this year. 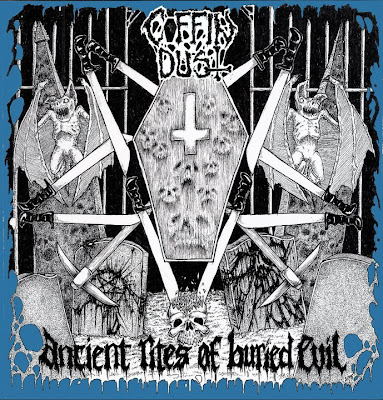 The EP starts off with a cheesy guitar intro more akin to a traditional metal band rather than a thrashing death metal band which leads into the song “I: March of the Machete Militia”, but it works with the music somehow. The bands sound is an odd mix of Swedish death metal and really punky thrash metal. I’m not quite sure how they pull this off, but they execute it really well and it makes for a very fun listen. The production is a bit muddy but you can still hear everything that’s going on, the drums and bass are high in the mix, which adds a nice heavy punch to their sound. The guitar tone is more of a thrash tone rather than a death metal type, but it’s made “darker” by the higher mixed bass. The vox are low-mid range and perfect for their sound.

The pace on the songs varies from fast d-beat Entombed worship to slowed down “Autopsy-ish” sections and everything in between. There are more than enough tempo changes to keep even the most Ritalin-addled thrasher happy and enough murky yet catchy riffs to keep the filthy death metal bastards banging their heads.

Coffin Dust are not playing anything “fresh” or “new” at all, but their style is still rather refreshing in today’s oversaturated death metal scene and I really look forward to hearing more of their stuff. I don’t really have any complaints about this release at all, although I would like to see a slightly better production job done next time, as I think it would allow the songs to stand out from each other a bit more.