Ataraxy – Revelations of the Ethereal 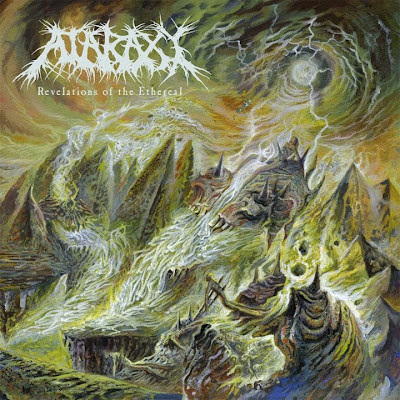 Spain is not a country that I really would have picked for a real death metal country, but it seems recently there have been a lot of killer bands popping up from this part of the world. Ataraxy is another band that can be added to the growing list of great Spanish death metal bands, alongside Morbid Flesh, Graveyard and Necroven, to name a few.

Ataraxy has been in the business of making old-school death metal for about 4 years now and are just about to drop their first full length album, entitled “Revelations of the Ethereal” on Memento Mori Records, following their previous demo and EP efforts. The 8 tracks on “Revelations…” reek of disgusting old-school Finnish death metal in the style of early Demigod and Convulse, as well as newer acts such as Krypts and Stench of Decay, however, Ataraxy have also put their own personal twist on this ancient sound by throwing in a bit of Asphyx and Bolt Thrower influence as well.

The guitar sound is crunchy, dense and muddy all at the same time, which contributes greatly to the eerie atmosphere that Ataraxy present. The vocals are more throaty than guttural, conjuring the outright aggression of Martin Van Drunen. The tempos tend to stick to a slow-to-mid-pace which suits the band perfectly and I think speeding things up too much would have a negative effect on the music. It’s that dark Finnish “doominess” that these Spaniards really excel at.

It’s damn near impossible to pinpoint stand-out tracks on an album as consistent as this, but I think “Ethereal Slumber” with it’s combination of crushing mid-tempos, doom passages, dank and murky atmospherics, somber harmonies and the occasional outburst of anger is my personal favourite. However, this opinion could change next time I listen, as every track is a winner.

"Revelations of the Ethereal" will be out soon on Memento Mori Records.
Posted by Vagabond at 4:29 PM