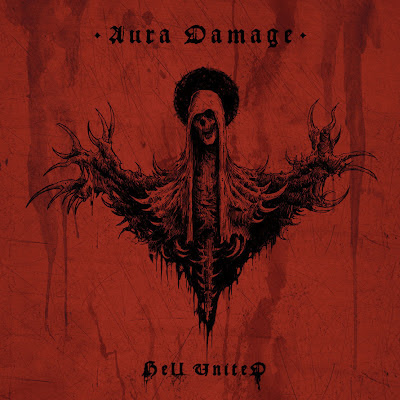 Hell United is a Polish black/death metal band who has been steadily releasing material since 1998, although until 2007 they went under the moniker Eclypse. “Aura Damage” is their second full length under the name Hell United.

For some odd reason, I wasn’t expecting much from this album, but I was pleasantly surprised at how well executed their brand of blackened death metal is. Very obviously influenced by bands such as Sadistic Intent and Arkhon Infaustus, the songs range from volatile tremolo/blast sections to crushing slower sequences and these Poles have crafted some pretty cool tunes. “Aura Damage” is still a rather straightforward and brutal beast, but the consistent changing of tempos and mood keeps things interesting enough.

I really can’t find too much to say about this album, as there’s nothing to really brag about and there aren’t exactly any stand-out tracks (in my opinion), but in saying that; there’s also nothing to complain about. Hell United simply stick to what they know best, which is pure and unadulterated death fucking metal. As it says in the promo sheet I received; “There is no mystery, just blood, bones and meat”.