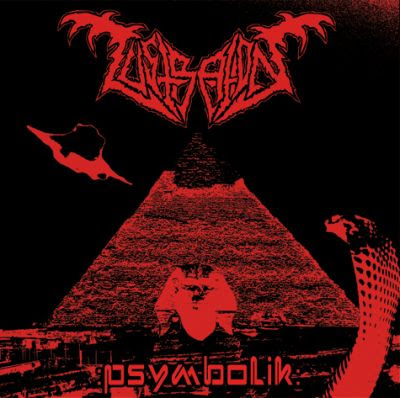 Lustration is a black/thrash/death metal band from Brisbane that features current and former members of Vilifier, Demonreich, Shrapnel, 308 and Spear of Longinus. Previously they have released one demo, entitled “Goetic Invokator”, which will be included as bonus tracks on their debut album “Psymbolik”, soon to be released on Supremacy through Intolerance.


Their sound is a mish-mash of early S.O.L., Celtic Frost, atypical Aussie black/thrash and early death metal a la Possessed. The guitar tone straddles the line between black and death metal with the riffs ranging from mid-to-fast tempos, the bass isn’t very audible but it has a presence and follows the guitar. The vocals range from low-mid range grunts to occasional higher-pitched shrieks that wouldn’t sound out of place in a straightforward black metal band.

The production on “Psymbolik” is suitably rough and raw, fitting the harsh and primordial music rather well. All the songs sound distinct from each other yet are still similar in style, allowing the album to flow as a whole. The standout tracks for me would be “Baptism of Blasphemy”, “Algolrythymn”, “Cosmik Devastator” and “Fall of the Rebel Angel”.

With “Psymbolik”, these Brisbane based heathens have delivered a solid piece of raw old-school extreme metal. Not the best album released this year, but definitely another killer record worth adding to the collection.