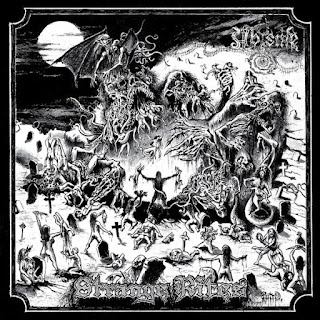 Old-school death metal worship is a hard musical formula to fuck up, really, especially when your band boasts a founding member of a killer OSDM band like Funerus! Abysme also count former members of Aus-Rotten and Crucial unit among their ranks. This three-piece band hailing from Pittsburgh, Pennsylvania have been around since 2006, but so far only released a demo in 2009 and their debut full length, “Strange Rites”, earlier this year on Hellthrasher Productions.

Abysme play a putrid blend of early 90s European and American death metal, sounding most akin to early Autopsy and Immolation with a heavy dose of early Entombed and Dismember thrown in to change things up. The tempos range from slow, to mid, to fast and the songs sound very raw and primitive with the occasional chaotic guitar solo.

There’s not too much more detail to go into regarding this album, but killer tracks such as; "Beyond The Seventh Door", "Gift to the Gods", "Terminal Delirium” and “Remarkable Conqueror" tend to speak for themselves and showcase some well-written and honest death metal.

Highly recommended for fat old dudes who wear leather jackets.
Posted by Vagabond at 2:24 AM