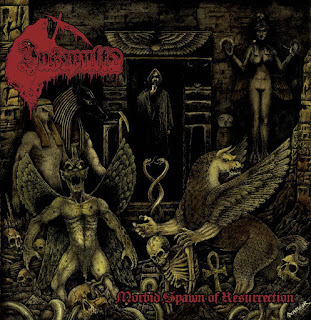 Insepulto is a Costa Rican death metal band made up of veterans from their local metal scene who have been involved in metal since the 90s. Formed in 2008, the band has previously released one demo before unleashing their debut album “Morbid Spawn of Resurrection” back in September.

Insepulto’s sound can be described as a mix of slower death metal bands such as Bolt Thrower, Asphyx, Autopsy, etc., primal death/thrash a la early Sepultura, Protector and the like and old-school Swedeath in the vein of Grave. The songs are written in a way that showcases three totally different styles without letting one particular influence overpower the others, which makes for some fresh sounding and varied OSDM worship. Some of the songs may seem a bit samey at times, but with an average length of three minutes, you won’t have time to get bored.

The riffs are savage and crushing, the drumming polished yet groovy and punishing, the bass surprisingly prominent and the vocals deep and guttural in the vein of Karl Willets and Craig Pillard. If songs such as; “Epitome of Rigor Mortis”, “Corrupting the Righteous” and “Sumerian Throne of Evil” don’t get your motor running, you’re probably listening to death metal wrong.

There’s not much originality to behold here, but if you’re in to bands such as Vanhelgd, Interment, Omision, Anatomia, Terminate and others who play old-school death metal for the love of the music, then “Morbid Spawn of Resurrection” should be right up your alley.
Posted by Vagabond at 7:43 PM