Kill for Satan - The Final Conflict 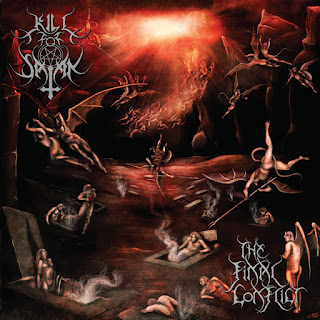 What’s not to like about Kill for Satan? They’re an Aussie band made up of guys who’ve been playing metal for a long time, who blend black, thrash and death metal in a way that doesn’t sound forced or cliché. Now, 8 years after the release of their excellent debut album, KFS have finally unleashed their sophomore; “The Final Conflict”.

Not much has actually changed since the first album and the music is very straightforward, but songs like “Rise of the Heretic”, “Litany of the Wretched”, “Immaculate Deception” and “Origins of Iniquity” sound tight, catchy, heavy and varied enough to keep the listener interested. Headbanging riffs and killer solos are readily available here, which is all you should really expect from a band that calls themselves Kill for Satan.

Occasionally the band throws in some eerie melodies that will really force you to sit up and take notice, keeping things interesting. This is most evident in the third track “Litany of the Wretched”, a slower and more spacious song compared to the rest of the album. To top things off, there’s also Autopsy and Possessed covers at the end, which are well executed and pulled off nicely with the bands sound.

If you’re a fan of extreme metal, you should have no trouble finding something to enjoy on this album.
Posted by Vagabond at 7:59 PM