Engulfed – Through the Eternal Damnation 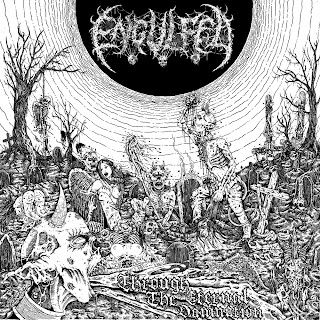 “Through the Eternal Damnation” is the debut EP by Turkish death metal band, Engulfed. It’s soon to be released on prolific label, Hellthrasher Productions.

The band can be described as stylistically similar to contemporaries such as Cruciamentum, Grave Miasma, Dead Congregation and Burial Invocation (with whom they share former members). Deliciously old-school, doomy death metal is what these Turks have to offer.

The songs vary in pace and often speed up to blasphemous blasts, but the overall vibe is dark and crushing death/doom of the highest order in the old Incantation style. Yes, I know; this style has been done to death now, but Engulfed do a good job at this tried and true approach to OSDM worship and bring their own flavour to the table.

The guitar work is the highlight here, as the riffs range from doomy dirges to all out bestial warfare, it’s clear that Engulfed know what they’re doing. The vocals are laid down thick and deep, sounding as if they were recorded in a tomb beneath their local chapel. The production sounds very professional and organic, allowing the music to breathe and speak for itself.

There is nothing innovative or new to be found on this release, but if that’s a problem for you, then I highly doubt you would be looking for a band like Engulfed in the first place. Songs like “Summoned” and “Inseminated with Demon Seed” absolutely reek of potential and I will be really anxious to see what this band can come up with in the future.
Posted by Vagabond at 4:04 PM