War Possession - Through the Ages 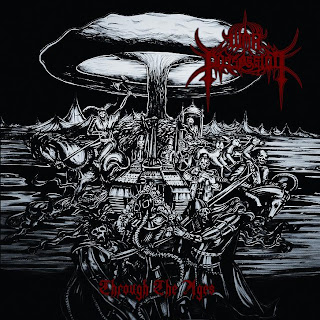 War Possession is a Greek death metal band who shares members with Embrace of Thorns, Wargoat and a few other underground acts. They previously released a demo in 2008, the same year the band was formed. “Through the Ages” is their first EP, which is soon to be released on Hellthrasher Productions.

The band draws on a variety of influences, with the most noticeable being Bolt Thrower, Benediction and Grave, with a hint of darker death metal a la early Morbid Angel, early Immolation, the early Finnish acts (specifically; Demigod and Convulse) and even the occasional grind influence in some of the riffs. Most of the songs groove along and pummel the listener in to submission, whilst occasionally straying in to darker and more atmospheric parts. The main focus, however, is on the crushingly heavy riffs and War Possession definitely delivers in that department.

This EP is also similar in parts to fellow Greek death metallers Nocturnal Vomit’s recent album “Cursed Relics”, which can’t be too much of a coincidence, seeing as one of their members provides additional vocals on the killer track “Medieval Bloodlust”.

Overall, War Possession has put out a great collection of songs that shows great potential and should hopefully earn the band some recognition in underground circles. If you’re not tired of all the OSDM worship being released recently, I would highly recommend that you track down a copy of this EP.
Posted by Vagabond at 4:05 PM